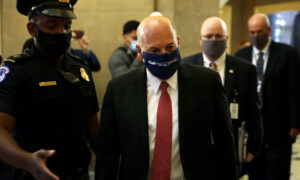 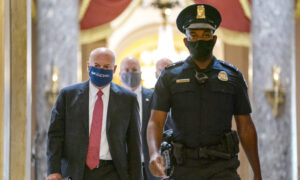 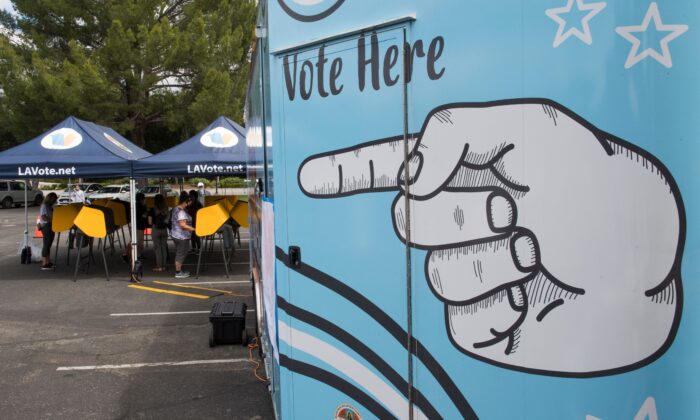 People vote at a voting station during a special election in Santa Clarita, Calif., on May 12, 2020. (Mark Ralston/AFP via Getty Images)
Crime and Incidents

A California man was charged with voter fraud after authorities said he voted for his dead mother in three elections.

Ceasar Abutin, 55, of Norwalk, “has been charged with allegedly casting votes in three elections on behalf of his mother who had passed away,” the Los Angeles District Attorney’s Office announced Tuesday.

Between October 2012 and November 2014, Abutin voted for both himself and his mother, authorities said.

Abutin faces three counts of fraud in connection with votes cast and fraudulent voting, or violations of elections code 18578, according to a criminal complaint obtained by The Epoch Times.

The code says “any person who applies for, or who votes or attempts to vote, a vote by mail ballot by fraudulently signing the name of a fictitious person, or of a regularly qualified voter, or of a person who is not qualified to vote” is guilty of a felony.

Abutin pleaded not guilty during an Aug. 19 court appearance. His preliminary hearing is set for Oct. 28 at the Foltz Criminal Justice Center.

A picture of the accused, who faces up to three years in state prison if convicted, was not made available.

The case was brought following an investigation by the district attorney’s Bureau of Investigation, with help from the Los Angeles County Registrar-Recorder/County Clerk’s Office.

The charges come amid an unprecedented push to vote by mail due to health concerns during the COVID-19 pandemic.

Many state officials say the process in November will run smoothly but some experts believe mail-in balloting may deliver fraudulent votes.

“Absentee or mail-in ballots are the ballots most vulnerable to everything from being stolen out of people’s mailboxes to being altered, forged, and they subject voters to being pressured, coerced and intimidated by campaign staffers, party activists, and political guns-for-hire,” Hans von Spakovsky, a senior fellow at the Heritage Foundation, said during a panel this week.

Primary elections mainly conducted by mail this year have run into severe issues, including a long period of time between the end of voting and the declaration of winners and the overwhelming of U.S. Postal Service workers.

He took to Twitter Wednesday morning to say that if people can protest in person, they can vote in person.