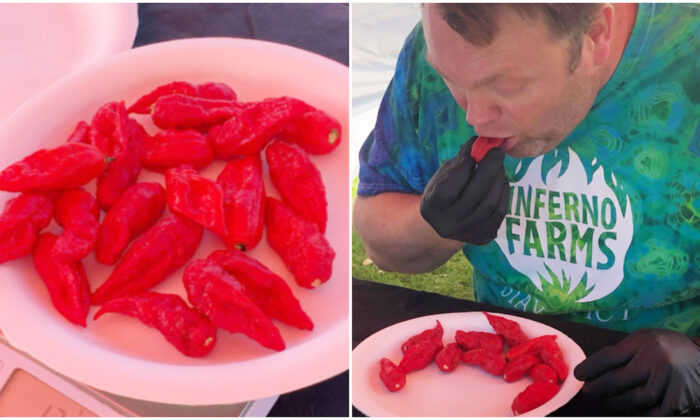 California native and chili enthusiast Gregory Foster has broken another world record, this time for eating the most ghost chili peppers in one minute.

Foster was recognized by Guinness World Records on Aug. 8 for eating 17 ghost peppers—also referred to as bhut jolokia chili peppers—in 60 seconds. In total, he consumed 3.98 ounces of the insanely hot peppers.

“This record attempt is a personal challenge to see how far I can push myself and my love of the super hot peppers,” Foster said.

Foster’s feat was accomplished back in November, in San Diego, California, according to a news release from Guinness. There is typically a delay between record-setting attempts and certification.

In comparison, the medium-sized chili pepper, the jalapeno, registers around 2,500 to 8,000 SHU.

Foster broke the record in a public park, so many people were able to witness the “spicy accomplishment.” Many passersby stopped to watch him break the previous record.

“As a chili lover, I’ve been trying to advance the awareness and the excitement surrounding the super-hot chilis out there,” Foster said.

“This attempt was solely a personal endeavor to achieve another Guinness World Record alongside my currently standing [ones],” he added. “I love chili eating and pushing myself.”

Besides pushing himself and attempting new records, Foster had always loved spicy food and even grows his own peppers at home. He has spent years pushing his tolerance level for spicy foods, now being able to stomach the hottest peppers in the world.

The previous record for eating the most “Carolina Reaper” chilies was held by Mike Jack, who managed to eat 3.42 ounces of the super hot peppers in March 2019 in Canada.