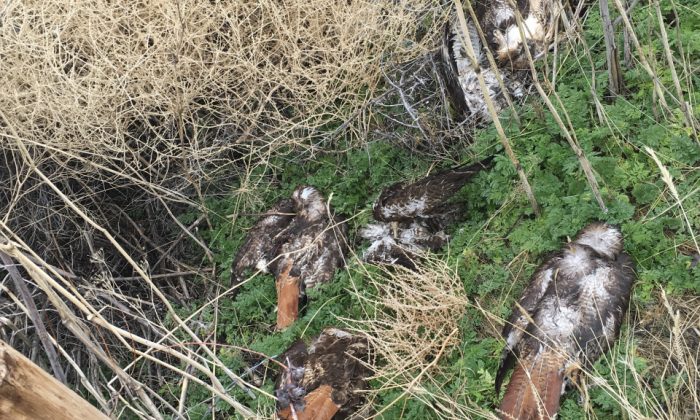 Bird carcasses found on the property in Lassen County, California. (California Department Of Fish And Wildlife)
US News

California wildlife officers have arrested a man in what has been described as the largest raptor poaching case in the state’s history.

Authorities found more than 130 dead hawks and other birds on an 80-acre property in Lassen County, said the California Department of Fish and Wildlife (CDFW) in a statement.

“It’s like nothing we have ever seen,” Captain Patrick Foy of CDFW’s law enforcement division told the SF Gate.

“I’ve been doing this for 21 years and some of us have been around in excess of three decades. We all kind of looked at each other and said we’ve known of nothing close to this many raptors involved in a poaching case.”

Officials were alerted to the property after receiving an anonymous tip from a person who said they saw a man kill a hawk in the area, the CDFW said.

A local officer inspected the property, and found two dead raptors in a tree and seven at its base, which justified obtaining a search warrant, the SF Gate reported.

Later, during the search, investigators with the help of a sniffer dog found a total of 126 raptor carcasses in addition to the original nine. They also found two dead bobcats, one taxidermied mountain lion, and other non-game birds, said the CDFW.

Most of the raptors found were red-tailed hawks. At least one dead owl was also found, as well as an uncommon migratory ferruginous hawk.

The property belonged to 67-year-old Richard Parker, who was booked on Sunday, March 11, with multiples charges including the take of birds of prey, take of migratory nongame birds as designated by the federal Migratory Bird Treaty Act, take of other nongame birds, and possession of wildlife unlawfully taken.

The illegal taking of raptors can lead to up to 6 months jail, and a fine of up to $5,000 per bird, the CDFW said.

Avian experts are currently working to identify the species of each bird killed. This is important because different birds are protected by different laws, which also carry differing penalty regimes, said Foy, reported the SF Gate. Therefore, the charges may change as the investigation proceeds.

Raptors, which are the top birds of prey in the food chain, play an important role in the ecosystem by controlling rodent and small mammal populations, the CDFW said. The removal of a large number of these birds is therefore expected to detrimentally impact the local environment.

“When you think about what raptors eat, it’s rodents, voles, mice, rats and squirrels. Those populations are very likely going to increase,” Foy said, reported the SF Gate. “More people want to see more raptors and less rats — but ultimately, that’s going to be reversed.”

“There’s no question about it, it’s going to be a concern for the immediate vicinity,” he said. “Taking 130 raptors out of the population? It’s going to take years to recover.”