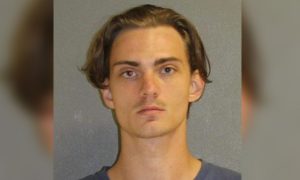 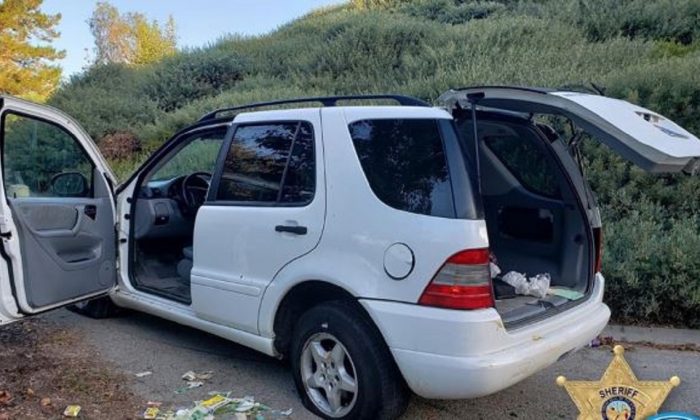 A man spotted trying to fix flat tires with band-aids and gauze was arrested by police in California after they discovered he was under the influence of drugs on Aug. 20, 2019. (OCSD - Mission Viejo Police Department)
Crime and Incidents

A California man was arrested after police found him trying to fix a flat tire with nothing but “gauze and Band-aids.”

The situation unfolded on Aug. 20 in Mission Viejo near Felipe and Barbadanes. A citizen saw the man with a pile of band-aids and other medical supplies strewn next to a car, using some to try to plug two flat tires.

One picture showed a tire with a gaping hole with a piece of gauze inside the hole.

The tires were located on the driver’s side of a white SUV.

“When deputies arrived, they noticed both of the driver’s side tires were flat and the 26-year-old man was trying to use gauze and Band-Aids to repair his tires,” the Mission Viejo Police Services of the Orange County Sheriff’s Office said in a statement. “He was arrested for being under the influence of drugs and taken to jail.”

“This is another great example of the teamwork between our alert community and your deputies! Keep calling in suspicious activity to keep our city safe!” the agency added.

The suspect’s name was not released. The incident took place around 6 a.m. in the morning.

“Omg a guy on drugs not bothering anyone- wow that was a close call! Maybe if he was taken to get some help for his drug problems- this would be a good story instead of to jail where the problem and more problems will persist and get worse costing tax payers more,” added another.

“Next time can you get a picture of the officers faces when they see him using bandaids to fix a flat,” said another.

“I find it Shocking that everyone finds this funny!! This Person is obviously ill, could have killed Someone while Driving around and has family that is no doubt hurting and have been through hell!! Really if this is what it takes To Make MV citizens laugh they should Move to LA they would be in hysterics!! Sad!!” said another.

“Wow! I learned how to change tires the hard way. Who knew you could use bandaids?” added another.

“Who has that many band aids in the first place?” wrote one.

“I wish they’d posted a pic of the guy that was trying to fix a tire with gauze and bandaids. A real rocket scientist,” said yet another.

Police in Florida said earlier this month that a man used a trick to rob a woman.

According to a Charlotte County Sheriff’s Office obtained by Fox 4, a man later identified as Ricky Nelson approached a vehicle around 10 a.m. and told her she had a flat tire.

When she rolled her window down, he allegedly punched her and took her purse.

The woman, Susan Vanvolkom, warned others.

“You think, oh, I wouldn’t fall for that. But, of course you would!” she told Fox 4. “I probably would’ve gotten out and looked. I honestly can’t say I would’ve done anything different.”

Nelson got away but witnesses captured images of his license plate, enabling his arrest later in the day. He was charged with battery and robbery.