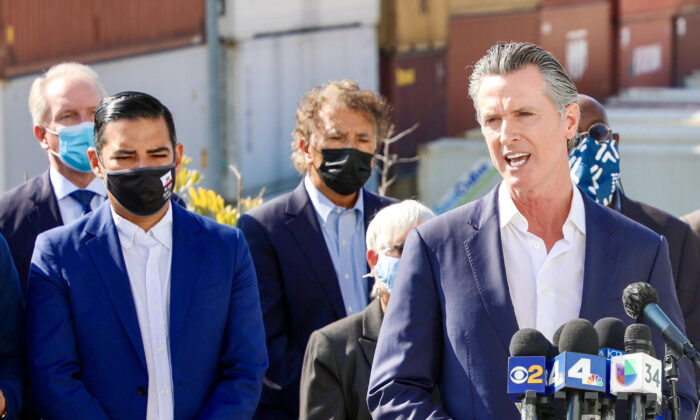 Gov. Gavin Newsom announces that trucks may carry slightly heavier loads to ease the supply chain congestion at the ports of Los Angeles and Long Beach, Calif., on Nov. 17, 2021. (Courtesy of the City of Long Beach)
Southern California

California will allow trucks to temporarily carry slightly heavier loads in its ongoing effort to ease the supply chain congestion at the Los Angeles and Long Beach ports, the governor announced Nov. 17.

“While that might not pose an immediate relief on the retail front, it will have a substantial benefit on industrial and manufacturing containers that will make their way into the ports of Long Beach and LA,” Newsom said at a Nov. 17 press conference.

The governor called the situation a “success,” and praised the work being done by cargo handlers in the face of mounting merchandise volume. Shipping containers were reduced by an estimated 32 percent in the ports in the past few weeks, he said.

The Biden administration’s Port Envoy John D. Porcari, who was assigned to work with the ports, said the crisis was “a good problem.”

“What you see behind you, with containers everywhere and lots of activity, is an economy roaring back to life,” Porcari said at the press conference. “This is a good problem to have.”

The infrastructure program would include help for communities adjacent to the ports, Porcari said.

“What we can do together to fix the goods movement chain to the benefit of future Americans is really why we’re here today,” Porcari said. “One important element of how that work is done is to make sure both equity and climate change are the lenses that we’re looking through as we do that.”

“Thanks Governor @GavinNewsom for touring the Ports of Long Beach and LA today. We are working with the state and the Biden-Harris Administration to relieve congestion and rebuild our infrastructure. We have already seen a 32% decrease of containers sitting on docks,” he wrote.

The twin ports typically handle about 40 percent of the nation’s seabound shipping but have been overloaded with record numbers of ships arriving with consumer goods this year.

Newsom issued an executive order last month, listing a number of steps the state planned to implement in response to the cargo logjam at the ports.

The governor was asked by the Truck Safety Coalition, a group dedicated to reducing the number of deaths and injuries caused by truck-related crashes, to make the extension “extremely short in duration.”

The U.S. Department of Transportation reported higher crash rates for trucks over 80,000 pounds, the coalition wrote in a letter in October.

An average passenger car weighs about 4,000 pounds, the coalition said.

Besides lifting a truck weight restriction, the state has opened 15 Department of Motor Vehicle sites on Saturdays to allow more drivers to get commercial licenses.

The extended hours allow the state to double its ability to provide driving tests, from 5,000 commercial tests per month to 9,700, Newsom said.

The state has also found 42 locations in the region to store containers, including private and public sites, he said.

California will get some of the infrastructure funding, but Newsom wasn’t yet sure exactly how much.

The state is expected to receive $25.3 billion for highways, $4.5 billion for bridges, $3.5 billion for infrastructure related to water and sewage. The state had flexibility and could move these funds to areas to pay for issues at the port, Newsom said.

Newsom also said more “sweeper ships” were expected to arrive at the ports to remove empty containers from the docks.

He also announced that three shipping carriers had agreed to divert to Oakland to offload goods.