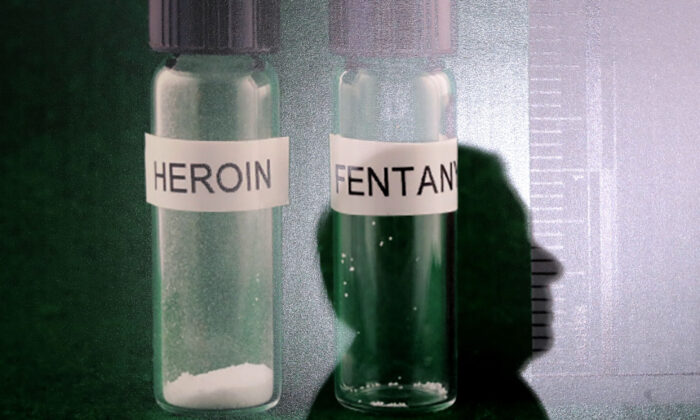 A photograph comparing the relative potency of heroin and fentanyl during a news conference at the U.S. Capitol on March 22, 2018 in Washington. (Chip Somodevilla/Getty Images)
Northern California

“The scourge of fentanyl is poisoning our communities, killing our kids, and wreaking havoc all across the state of California,” Assemblywoman Cottie Petrie-Norris (D-Irvine) said in a Zoom press conference on March 29 while introducing a new bill to halt the crisis.

“Just two milligrams is enough to kill. That’s two grains of salt,” Petrie-Norris said while explaining the harsher penalties the bill will enforce on drug traffickers.

The bill makes the possession of two grams of fentanyl to be a felony and aligns the silent killer as a Schedule I drug—a drug not accepted for medical use and likely to be abused, such as heroin and cocaine.

Under this proposal, traffickers would face 20 years to life in prison for fentanyl distribution that results in death.

Current state law enforces longer prison sentencing—adding one to two more years—for selling heroin and cocaine in or nearby a facility that serves children, such as schools, child care centers, or churches, and AB 2246 will add fentanyl to the list.

The legislation will also impose penalties for selling fentanyl on social media.

Petrie-Norris acknowledges she will struggle to push the bill through the state Assembly Public Safety Committee as not all lawmakers are on board with stopping the epidemic.

“I do have some allies and some folks on both sides of the aisle who recognize that this is a crisis and recognize that it is important for us to act … [but] there is not enough of them,” Petrie-Norris said, urging residents to call their representatives and take actions.

In Orange County, fentanyl deaths jumped significantly from 37 in 2016 to 693 in 2021, with 16 cases still pending, Sheriff Don Barnes highlighted.

“This legislation doesn’t target the drug-addicted, it targets … the drug traffickers who are oftentimes intentionally distributing to young adults and children with the intent of creating new addicts,” Barnes said.

However, the crisis extends nationwide as deaths skyrocketed between April 2020 and April 2021, with over 100,000 Americans succumbing to overdoses, primarily from fentanyl, said Barnes.

“This fentanyl crisis is the nation’s most significant long-term public health, public safety crisis,” Barnes said. “If not for COVID-19, this would be the predominant issue that we would be facing as a nation.”

While Barnes hopes the crisis will hold traffickers accountable and save young lives, the county’s Superintendent of Schools Al Mijares also fears the number of students who will encounter the lethal drug during spring break.

“We had two young girls just months ago who told their parents they were going to go study together,” Mijares said. “[They] took the drug, fell asleep, and never woke up.”

Victims of Illicit Drugs President Jaime Puerta lost his son to fentanyl poisoning in April 2020 after he bought what he thought was a pharmaceutical drug from the social media platform Snapchat.

Puerta found his son unconscious in his room before he passed away at a hospital a few days later.

“Had my son known or had the knowledge that the pill that he was taking was a fake pill made of fentanyl, he would never [have] consumed it and would’ve been alive today,” he said.

Since his son’s death, Puerta has dedicated his time to bringing awareness of the epidemic while urging lawmakers to take action and enforce harsher penalties on traffickers.

“Our legislator has been woefully negligent and incapable of bringing solutions,” he said while praising Petrie-Norris’s efforts.

While Petrie-Norris’s attempts are applauded, another proposal to deter fentanyl trafficking was shut down by a committee this week.

AB 1955, introduced by Assemblywoman Janet Nguyen (R-Garden Grove), would have similarly imposed tougher sentencing and penalties on fentanyl trafficking by treating fentanyl as a Schedule I drug rather than Schedule II.

However, the bill failed during a public safety committee meeting on March 29 with a 4–2 vote.

It’s unclear when Petrie-Norris’s proposal will be heard.