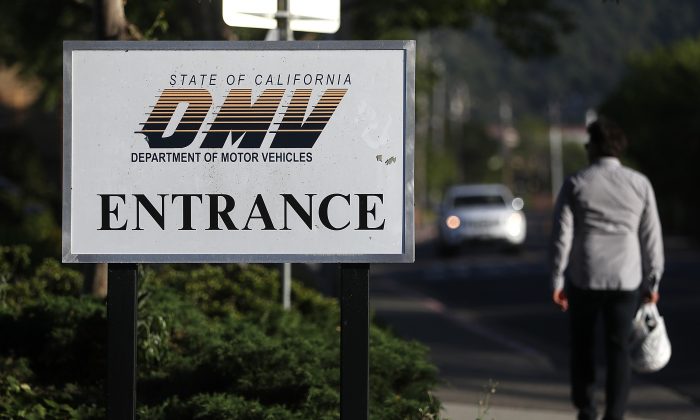 A sign is posted in front of a California Department of Motor Vehicles (DMV) office in Corte Madera, Calif. on May 9, 2017. (Justin Sullivan/Getty Images)
Southern California

Four Republican assembly members from California have sent a letter to the state’s Joint Legislative Audit Committee calling for an audit into the Motor Voter program.

The Feb. 1 letter to Chairman Rudy Salas was written by Jim Patterson from the 23rd District and signed by Vince Fong from the 34th District, Kevin Kiley of the 6th District, and Tom Lackey of the 36th District.

“The Motor Voter program has had serious and concerning problems since its rollout in April 2018,” the letter said. “The Department has acknowledged making 105,000 registration errors, including mishandling voter registration information for 23,000 drivers and double-registering as many as 77,000 others.”

A bombshell report revealed repeated warnings about California’s failed Motor Voter Program were ignored by the man in charge of CA elections. Since then, thousands of voter registration errors have been made. I submitted my audit request Friday. It’s time we know the truth. pic.twitter.com/kJWiUIruzh

“Included in this are 1,500 ineligible voters registered by the DMV, and over 500 Californians may not have been able to vote in this past election because the DMV did not send their information to the Secretary of State’s office in time,” continued the letter.

The letter follows what Patterson called a “bombshell report” on Jan. 31 by the Sacramento Bee, in which election officials said they warned that the Motor Voter program wasn’t ready to launch so close to an election. However, the state went ahead and started the program on April 23, 2018.

Republican state Sen. John Moorlach, from the 37th District, also addressed the issue in a Jan. 31 statement on his website.

“The Democrats have been dominating California’s Capital for four decades,” he wrote. “This is not enough. Consequently, in their efforts to pile on in the 2018 elections, they rushed Motor Voter registrations at the Department of Motor Vehicles to juice up their numbers.”

Patterson called for an independent audit of the DMV in 2018 due to numerous other reported problems, such as long wait times and inefficiency. However, the request failed to pass the joint audit committee in August, with not enough support from Democratic Senators.

However, then-Gov. Jerry Brown suddenly called for a DMV audit by the Department of Finance a month later. Although legislators who had supported an independent audit had hoped the audit would have been conducted by the state auditor, they were still happy the audit was scheduled to occur.

Since then, “disturbing developments have come to light within the continued rollout of the Motor Voter program,” said Patterson in his recent letter.

The letter requested the audit to investigate 10 areas of particular concern:

1. When did the DMV, secretary of state, and Department of Technology (CDT) first become aware of issues with the Motor Voter program? How did they become aware? At what points were these concerns expressed?

2. What was done to address concerns about the program’s readiness before the program rollout in April 2018?

3. What steps or training procedures were taken by the DMV to ensure both employers and the programs were performing tasks correctly before implementing the Motor Voter program in April 2018? What did the implementation process look like?

4. Has the DMV informed Secretary of State Alex Padilla of any potentially illegitimate, duplicate, or incorrect registrations? In what ways did the DMV work with the secretary of state’s office to rectify the issue of improper voter registrations?

5. How much money has been spent rectifying technical problems with the program that were uncovered after its rollout?

7. How has the DMV’s outdated technology inhibited successful implementation of the Motor Voter program? Are the errors with the program due primarily to technology malfunctions or technician errors? To what extent have these issues been addressed?

8. What is known about the accuracy and legality of the 2.8 million voters, who registered, re-registered, or changed their address through the Motor Voter program?

9. Using a sample of completed registrations, determine how many registrants were affected by errors, either by DMV mistakes or programming errors; being opted in against their will; or having their party registration changed or registered to vote without the legal right to do so.

10. To what extent within internal communications were political calculations weighed in deciding to begin registering voters before the program and operators were ready for implementation?