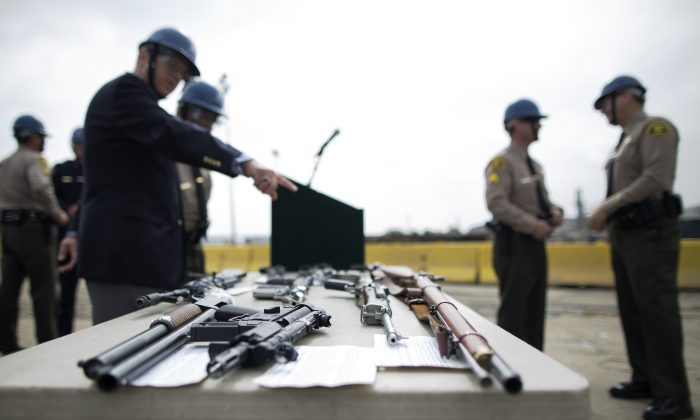 Officials look at confiscated guns prior to the destruction of approximately 3,400 guns and other weapons at the Los Angeles County Sheriffs' 22nd annual gun melt at Gerdau Steel Mill on July 6, 2015 in Rancho Cucamonga, California. (David McNew/Getty Images)
US

California is set to become the first state in the nation to let police seize legally-owned guns without notice.

The law, which is scheduled to take effect on Friday, will enable family members to ask a judge to remove firearms from a relative who appears to pose a threat.

The bill authorizes a court to issue “a temporary emergency gun violence restraining order” if an officer and a judge finds “there is reasonable cause to believe that the subject of the petition poses an immediate and present danger of causing personal injury to himself, herself, or another by having in his or her custody or control, owning, purchasing, possessing, or receiving a firearm and that the order is necessary to prevent personal injury to himself, herself, or another,” reads part of the bill.

Democrats proposed the legislation in response to a deadly 2014 rampage near the University of California–Santa Barbara. Victims’ relatives said the parents of 22-year-old Elliot Rodger were blocked from seeking help for their troubled son before the rampage.

Rodger went on to kill six people and injure 14 others on the Isla Vista campus, after which he killed himself.

“The law gives us a vehicle to cause the person to surrender their weapons, to have a time-out, if you will,” Los Angeles Police Department Assistant Chief Michael Moore told SCPR.

It’s the family members, it’s the people closest to the perpetrator who are in the best position to notice red flags.
— Dr. Wendy Patrick, San Diego State University

“It allows further examination of the person’s mental state.”

After three weeks, the person who has their guns taken can challenge the judge’s decision.

“It’s a short duration and it allows for due process,” Moore said. “It’s an opportunity for mental health professionals to provide an analysis of a person’s mental state.”

“It’s the family members, it’s the people closest to the perpetrator who are in the best position to notice red flags,” San Diego State University professor and attorney, Dr. Wendy Patrick, told CBS.

But there’s opposition to the law.

“We don’t need another law to solve this problem,” said Sam Paredes, executive director of Gun Owners of California. “We think this just misses the mark and may create a situation where law-abiding gun owners are put in jeopardy.”

A separate, new law requires that certain airsoft BB guns and pellet guns come with bright markings to distinguish them from real firearms.