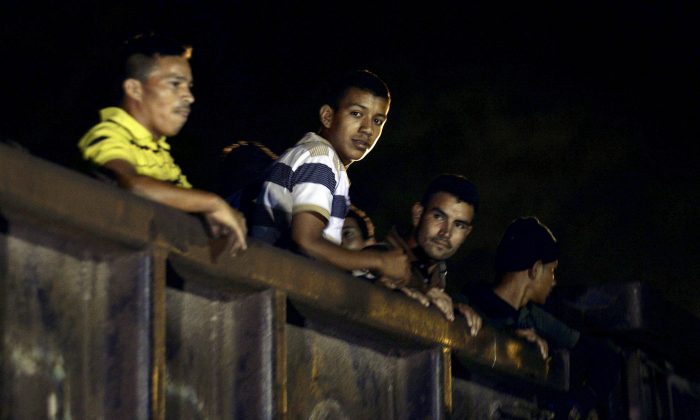 Migrants travel on board of a train in Palenque, Chiapas state, Mexico, on June 20, 2015. Hundreds of Central American migrants arrive in Mexico on their way to the United States. (Alfredo Estrella/AFP/Getty Images)
US

SANTA ANA, Calif.—Nubia Rodriguez was assaulted and kidnapped by an ex-boyfriend, crimes that made her eligible for a special visa for immigrants in the U.S. illegally.

To apply, she needed law enforcement officials that handled the case to sign paperwork documenting the crime and her assistance in the investigation. She contacted the San Joaquin County District Attorney’s office but never got an answer.

Her experience is not unusual and led California lawmakers to pass and Gov. Jerry Brown to sign legislation requiring local police or prosecutors to sign the form that immigrant crime victims need to apply for a so-called “U visa” so long as they are otherwise eligible.

Messages left at the San Joaquin County District Attorney’s office were not returned.

The measure was one of a spate of bills enacted in California this year to help immigrants in the country illegally. Others include anti-discrimination measures and giving low-income children access to state-subsidized health care.

Immigrant advocates say thousands of immigrants will likely benefit from the crime victim law, including many victims of domestic violence who might otherwise be reluctant to report their assailants over fear authorities might refer them to federal agents for deportation.

Immigrant victims of specific crimes including rape, torture and extortion who cooperate with law enforcement are eligible to apply. There is no statute of limitations between when the crime occurred and the visa is sought.

US Vows to Help Europe, but Will It Take in More Migrants?

Until now, law enforcement agencies in California have taken different approaches. Some routinely sign the documentation and others rarely or never do, either because they’re understaffed or because of political opposition.

“California is taking steps to say: ‘We’re going to create equity across the state and it shouldn’t matter where in California you survived this terrible crime,'” said Michelle Carey, senior attorney with the Los Angeles Center for Law and Justice, which provides legal services to low-income and immigrant communities.

Nicole Nishida, a spokeswoman for the Los Angeles County Sheriff’s Department, said she doesn’t foresee a big change under the new law since the agency routinely signs the forms. In Oakland, police approved nearly all of the 1,600 requests received in 2014, according to department statistics.

In Kern County, Sheriff Donny Youngblood said he has signed only five of some 200 requests he has received for U-visa certification and those were cases when immigrants were needed as witnesses in a court case.

“It doesn’t make logical sense because you were a victim of a crime 10 years ago you should be allowed to stay in the country,” he said, adding that he’ll comply with the new law.

The visa program was created by Congress in 2000 to encourage immigrants in the country illegally to report crimes without fear of deportation and to help law enforcement crack down on violent crime.

While the number of visas is capped at 10,000 per year, about 26,000 people applied in the 2014 fiscal year. The backlog in applications likely will continue to grow, in part thanks to the California law.

Once the law takes effect in January, agencies will need to review requests in 90 days and report on how many they sign to the state, which immigrant advocates say will help ensure compliance even though no penalty was written into the law.

Rodriguez did end up getting approved for a visa, but not because of the crime against her. Her teenage daughter had also been the victim of a crime, and under the terms of the federal government’s program, parents who help law enforcement investigate crimes against their children can also apply.

How the Drug War Drives Child Migrants to the US Border

In her daughter’s case, the city of Tracy’s police department signed the necessary paperwork within a month.

That sort of speed would have been welcome when Rodriguez originally tried for the visa in 2012. She had already delayed making the request for a decade, worried she might end up being deported to Mexico, where her ex-boyfriend fled after she escaped and reported him to authorities.

“I felt like at any moment he might come in where I was living. It was truly a trauma,” she said, adding that getting her visa approved has given her family more stability.