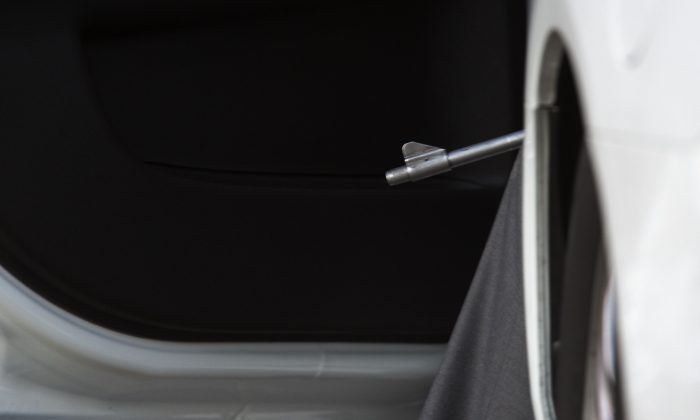 A gun barrel extends from the open door of an undercover police car during the seach for the California killers on December 2, 2015. (David McNew/Getty Images)
US

Syed Rizwan Farook, who with his wife killed 14 people and wounded a number of others in a massacre in California on December 2, recently traveled to Saudi Arabia.

Farook, a U.S. citizen and devout Muslim whose family is believed to have immigrated from Pakistan, returned from the Middle East with a new wife.

Soon after Malik arrived with Farook she got pregnant, and the couple left behind a 6-month-old daughter. Co-workers recently threw a baby shower for the health inspector and he took some paternity leave.

Patrick Baccari, a fellow health inspector who shared a cubicle with Farook, told the Los Angeles Times that the couple seemed to be “living the American dream.”

Officials haven’t confirmed the purpose of Farook’s trip to the Middle East, and have not ruled out terrorism as a motive.

ISIS supporters have been celebrating the attack but haven’t taken credit for it as of yet.

Hussam Ayloush, Council of American Islamic Relation executive director, said that Malik is believed to originally be from Pakistan but lived in Saudi Arabia before coming to the United States.

Co-workers indicated that the couple first met online before Farook traveled to meet Malik. Relatives told the Associated Press that Farook did travel there to meet Malik.

Malik’s brother, Farhan Khan, didn’t shed any light on the history of the relationship when he offered his family’s condolences for the attack and said he didn’t know why the couple did it.

Federal officials told NBC that customs and border protection records confirm Farook recently traveled to Saudi Arabia, but say at this point he likely wasn’t radicalized there. His trip was likely for the hajj, a pilgrimage that devout Muslims are required to do.

Farook was reportedly a devout Muslim who started growing out his beard after returning from his trip earlier this year.

Farook’s dad told the Daily News that his son was a very devout Muslim.

“He was very religious,” the elder Syed Farook said.

“He would go to work, come back, go to pray, come back.

In an online dating profile attributed to Farook, he describes himself as part of a “religious but modern family” and says that his family values were an “Eastern and Western Mix.”

Under religion he listed Muslim. He listed among his activities reading religious books.

President Barack Obama said on December 3 that the FBI is conducting an investigation and is trying to pinpoint a motive.