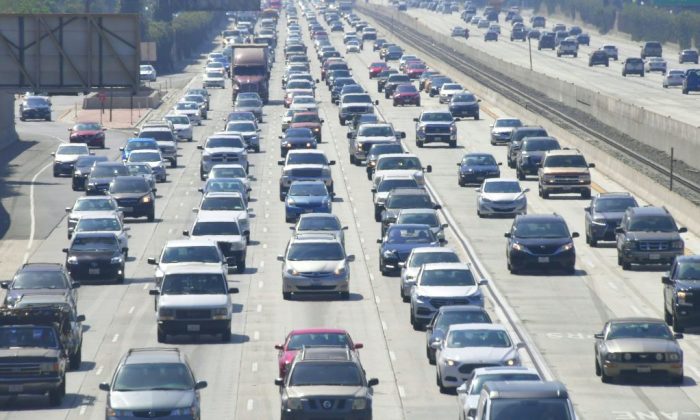 Auto traffic flows in and out of Los Angeles, California, one of the worst traffic-congested cities in the country, on Aug. 28, 2018. (Frederic J. Brown/AFP/Getty Images)
Southern California

California Issues Alert for 9th Day in a Row, Again Requests No Charging of Electric Vehicles

California’s power grid urged customers to conserve energy for the ninth day in a row on Thursday as homes and businesses crank up their air conditioners to escape a brutal heat wave lingering over the drought-stricken region since the start of September.

The California Independent System Operator (ISO), the grid operator for most of the state, said consumer conservation efforts so far this week have been key to helping the grid avoid rotating outages. Demand for power in the ISO hit an all-time high on Tuesday while prices for Tuesday and Wednesday hit two-year highs before dropping on Thursday.

The ISO again issued an alert and called on residents to not charge their electric vehicles, use major appliances, and to turn off lights between 4 p.m. and 9 p.m. That’s because the state, in part, relies on solar energy. When the sun goes down, solar power stops working.

High temperatures in Sacramento, the state capital, have topped 100 degrees Fahrenheit every day in September and were forecast to reach 111 degrees F on Thursday and 106 F on Friday before the heat wave breaks on Saturday, according to AccuWeather.

On Wednesday evening, the ISO announced it is ending its “Energy Emergency Alert” at level 3 “with no load sheds for the night. Consumer conservation played a big part in protecting electric grid reliability.”

The ISO confirmed Wednesday that there was a miscommunication with a regional utility company in Northern Californa, which led to some unplanned power outages earlier this week.

“It’s regrettable we did have a communication issue,” said Elliot Mainzer, chief executive officer of the California Independent System Operator, as reported by KCRA-3. In the Central Valley city of Lodi, city managers said that Tuesday’s outage that led to 1,400 customers losing power was done “in error.”

As the ISO issued alerts this week, questions have arisen over whether the state’s grid can handle widespread electric vehicle usage. Last month, the California Air Resources Board voted unanimously to phase out gas-powered cars in favor of electric ones by 2035.

Several unnamed California drivers who were interviewed by KTLA-TV several days ago expressed concerns about the alerts.

“If we can’t do these things today, how are we going to do when everything needs to be electric?” one driver asked. “Unless you have a home charger it’s an absolute disaster,” an electric vehicle owner, named Rebecca, told the station.