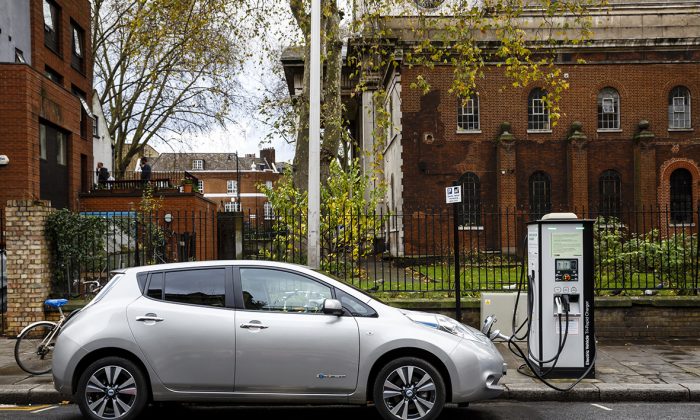 An electric car charging at a station. (Miles Willis/Stringer/Getty Images)
US News

California is Moving Closer to Charging for Every Mile You Drive

Californian lawmakers are considering ways to charge drivers based on how many miles traveled rather than how much gas used.

The reason for studying the per-mile tax is because the gas tax is not generating enough revenue to fix all the 50,000 miles of roads in California, according to the state.

However, according to State Senator Scott Wiener, it is not only an issue of revenue but also due to a question of fairness.

Currently, Californian drivers who have older cars that are fueled by gas are paying a gas tax to maintain the roads. Drivers who have fuel-efficient cars reportedly pay less, reported CBS.

“If you own an older vehicle that is fueled by gas, you’re paying gas tax to maintain the roads. Someone who has an electric vehicle or a dramatically more fuel-efficient vehicle is paying much less than you are. But they are still using the roads,” Wiener told the news station.

According to Wiener, people are going to use “less and less gas in the long run.” As a result, the state is anticipating less and less revenue will be available for repairing highways and local roads.

“We want to make sure that all cars are paying to maintain the roads,” Wiener said.

According to the program’s website, the nine-month pilot began in July 2016, with over 5,000 participating vehicles statewide.

The pilot program found 73 percent of participants felt a per mile tax was a fairer funding solution than the gas tax.

The program tested different reporting methods while taking into consideration privacy and data. It tested manual options such as an odometer charge, where you pay for the number of miles traveled since the last odometer charge, and pre-payment options that were charged based on either a fixed number of miles or a fixed period of time. Automated options were also tested such as using a plug-in device in your vehicle, smartphone app, and in-vehicle telematics that report miles using technology integrated into vehicles.

“The reality is that if you have a smartphone, your data of where you are traveling is already in existence,” Wiener told CBS.

But the possibility of introducing a new tax to replace the gas tax is not sitting well with all drivers.

Joshua Li, the owner of a hybrid BMW, told CBS he currently saves $200 a month by not using gas. He said he would not be happy if he was taxed per mile.

Randy Rentschler of the Metropolitan Transportation Commission suggested alternatives to the per-mile tax like further increasing the gas tax and increasing the registration fee for electric cars, reported the news station.

“If you buy a small car that gets great fuel economy, we don’t get enough money to repair the roads … but the fact of the matter is people are buying trucks,” Rentschler said.

Jim Madaffer from the California Road Charge Technical Committee said if the per-mile tax does get implemented, the public won’t even notice it.

“It is something that the public won’t even notice. Just like how they don’t notice the gas tax right now. The idea is it replaces the gas tax—the gas tax goes away and instead you pay for the miles you pay on public roads,” Madaffer told KPBS news.