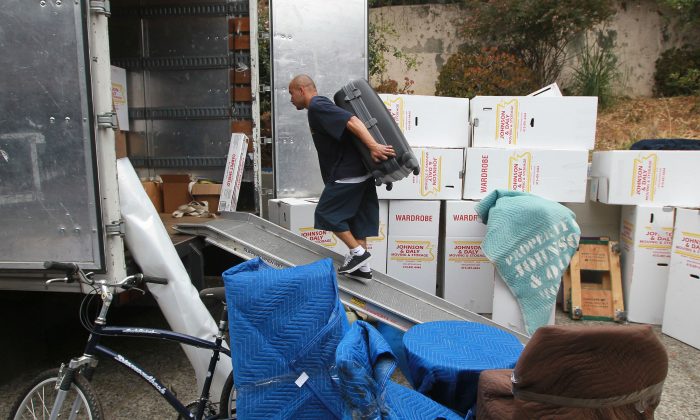 A worker moves a piece of furniture into a truck while moving a family in Tiburon, Calif., on Aug. 3, 2010. (Justin Sullivan/Getty Images)
By Alice Salles

Alice Salles
Alice Salles is a contributor to the Mises Wire based in Fort Wayne, Indiana.
View profile
biggersmaller
Print

The state of California has the largest economy in the nation. But despite its estimated $2.9 trillion gross domestic product, which is spearheaded by Hollywood, Silicon Valley, and agriculture, California saw record-low population growth in 2018.

At only 0.47 percent, the slowing growth rate is partially due to the large number of Californians leaving the state, according to experts. At the current rate, Calmatters reported, a large state like Texas would only reach California’s population levels in 2047.

While Californians leave at a greater rate than people from other states move in, foreign immigration continues, helping to bring the state’s total population to nearly 40 million in 2018.

But while immigrants flood in and the wealthy remain, it is the working class and the less educated who are finding that life in the Golden State is far from dreamy.

According to the Internal Revenue Service (IRS), the exodus of Californians is largely comprised of working class families whose main providers are under the age of 35 and who make less than $50,000 a year. They also tend to move to states with a more business-friendly environment such as Nevada, Texas, Arizona, or even Oregon.

Most recently, the Great Recession of the late 2000s and early 2010s fueled an even greater exodus. And now, more than 7 million people who were born in the state have moved out, reported Calmatters.

But as the working class leave in droves, the state loses fewer college graduates than it gains, a pattern that the Public Policy Institute of California reports “doesn’t happen anywhere else in the country.” On balance, 162,000 adults with at least a bachelor’s degree have moved to California from other states in the past five years.

Furthermore, data shows the Golden State now has more than one million millionaires, making it a popular choice of residence for the super rich.

According to Charles Varner, the associate director of the Stanford Center on Poverty and Inequality, the state’s high taxes might significantly affect the rich, but the opportunities to make more money are outweighing the losses.

“We often think that the only way for a state to be ‘competitive’ is to be like Texas — a low-tax, low-infrastructure, low-services state,” he wrote. “But the reality is that the most competitive places in the U.S., the leading drivers of the economy, and the centers for top talent are New York and California — and they have been for generations, despite higher taxes on top incomes.”

To Dr. Lawrence J. McQuillan, a senior fellow with the California-based Independent Institute and the organization’s Center on Entrepreneurial Innovation director, the data actually shows a disheartening reality, as “California is rapidly becoming a state that only the wealthy can afford.”

In an interview with The Epoch Times, McQuillan said that while the entertainment industry, Silicon Valley, and other industries are responsible for the great number of millionaires in the state, these are “network” industries that benefit from “working close to similar companies and suppliers.”

In other words, he explained, “scale and network economies are the ‘glue’ that keeps these industries in California and their millionaire employees planted in the Golden State.”

But there are also other incentives that keep the wealthy from moving out.

“Many of these well-paid professionals receive compensation in tax-deferred capital assets, shielding some of their compensation from California’s high individual tax rates,” he said.

And because these people can afford services that “insulate them from the daily headaches and threats that low-income people experience,” McQuillan added, they are more likely to “avoid the crime, delays, and street life that low-income people deal with daily,” making California more appealing to them than the average resident.

“Low-income people rightly see greener pastures in other states because of California’s high cost of living, which is fueled by faulty public policies.”

Most concerning to people in the low- and middle-income brackets are the state’s housing crisis and license requirements for professionals who don’t have the money to go to college.

“Housing in California is about two to three times more expensive than in other states due to permits, environmental regulations, land use restrictions, union labor perks, and other government mandates,” he said. Additionally, “occupational licensure makes it increasingly expensive and difficult for low-income people with less education to pursue their dreams and start their own businesses.”

And to those looking for jobs in the Golden State that don’t require a keen entrepreneurial spirit, McQuillan said, things are made worse by the high minimum wage laws.

“[Such laws] eliminate the lower rungs of the job ladder for people with fewer skills or less job experience.”

With so many “misguided and ill-informed public policies,” the economist added, California will likely continue to drive out working class people.

“I don’t see the current exodus reversing anytime soon given the views of California’s political class,” he concluded. “In fact, I think the exodus will increase until policies change.”

Alice Salles
Alice Salles is a contributor to the Mises Wire based in Fort Wayne, Indiana.