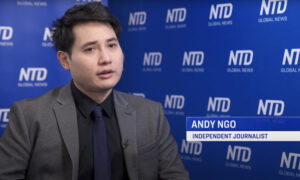 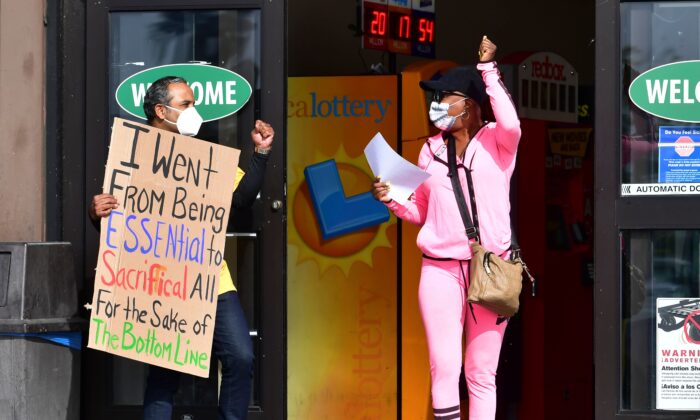 A woman gestures in support of supermarket workers holding placards in protest in front of a Food 4 Less supermarket in Long Beach, Calif., on Feb. 3, 2021. (Frederic J. Brown/AFP via Getty Images)
US News

The class divide and inequality in the state of California are currently at levels similar to those seen in Mexico, according to author and university professor Joel Kotkin.

Kotkin, urban futures fellow at Chapman University, and author of “The Coming of Neo-Feudalism: A Warning to the Global Middle Class,” told Epoch Times affiliate NTD that a major factor driving residents and business owners out of the state is that the gap between the middle and upper class is now wider in California than virtually any other place in the country.

According to an Urban Reform Institute report (pdf) published in October 2020 and co-authored by Kotkin, over the past two decades, California has seen a net loss of about 2.4 million people—or 7 percent of its 2000 population. The figure excludes the most recent exodus linked to the CCP (Chinese Communist Party) virus pandemic.

Meanwhile, California also has the highest poverty rate in the United States.

Kotkin highlighted the state’s energy policy, “which makes California very expensive for anything that uses energy.”

“We’re basically trying to get rid of natural gas. We’re systematically destroying our own once very large oil industry. And so manufacturers certainly have to go elsewhere,” he said.

California’s climate policy and rising property prices also are contributing to the number of people leaving the state, Kotkin said.

“In our climate policy, we have made the mistaken idea that the way to deal with climate is to force people to live in small apartments in urban areas,” he said. “Whereas the vast majority, even before COVID-19, wanted to live in a single-family house more in the suburbs.

“We’ve created the highest property prices in the country—one of the lowest homeownership rates.

“If you’re a young family in California, unless you make a lot of money or you robbed the bank or have rich parents, you’re going to probably have to either accept the fact that you’re going to live in an apartment, that you’re probably never going to own anything, probably not going to have kids—or you go somewhere else,” he said.

“If you can’t own a home, you’re always going to be at the mercy of your landlord, you won’t have anything to rely on. That’s where we’re losing so many people, which I think does not bode well.

Kotkin noted that when he came to California in 1971, it was common to meet people who had moved from other U.S. states.

Based on a study he’s working on, Kotkin said foreign-born people who had been drawn in huge numbers to California over the past two to three decades—immigrants attracted by opportunity—are now going elsewhere.

“Los Angeles is actually seeing a bit of a drop in its foreign-born population—they’re going to Dallas, they’re going to Nashville, they’re going to Fayetteville, Arkansas. When you look at the great rise of California in the latter part of the 20th century, a lot of it was driven by both domestic migration and foreign immigration. Both of those have dropped.”

“There was no justification for it. It caused huge problems,” Kotkin said.

While Newsom has acknowledged the state’s housing pitfalls, and has called for building 3.5 million new homes by 2025, an analysis (pdf) of census data by Kotkin found that housing construction continues to lag in the state, burdened by lengthy permit processes and often years of litigation, with 110,000 housing units built in 2019.

This number is far below the 302,934 units built in 1986 when California had a third fewer residents; at the current rate, it would require nearly 30 years to build 3.5 million homes, according to Kotkin.

“The greatest creation of wealth, probably in the world, is now taking place in California. At the same time, the average Californian is doing less well,” he said.