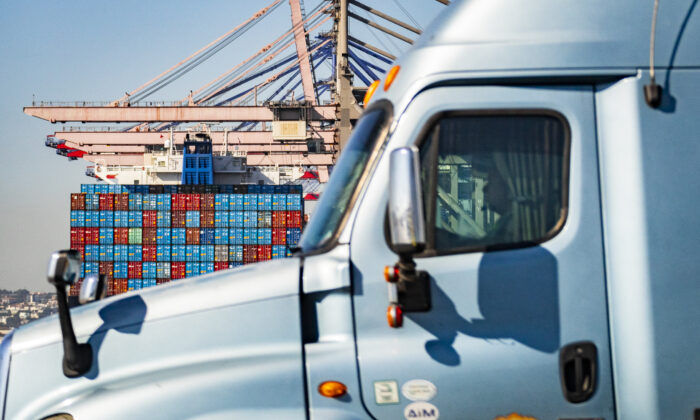 A semi-truck arrives to the Port of Long Beach on Oct. 14, 2021. (John Fredricks/The Epoch Times)
Viewpoints

California Independent Contractor Law Now Applies to Truckers. What Shortages Are Next?

My late father-in-law, Mike Isetta, was a member of the Teamsters Union for 40 years, hated the union and all their practices for most of his years, and would be spinning in his tomb if he saw California’s latest attempt to turn independent truckers into dependent wage slaves or unemployed ex-drivers.

A little background: In California, there are approximately 170,000 truck drivers who supply 38 million residents with all the stuff of life, from the ground chuck in the supermarket to the Tylenol in the pharmacy to the 4K TV on your wall. Around 70,000 of them are independent owner-operators, and last week, they lost a massive battle against California AB5, a ham-fisted power grab that could force them to give up their independence, move out of state, or go out of business. Given the fragility of our current supply chain, the potential loss of 41 percent of its California links is the stuff of nightmares.

Here’s the breakdown: 100,000 California long-haul drivers are company employees, who work for a freight carrier, receive a comfortable salary and full benefits, and pay Teamsters Union dues, a good percentage of which goes to support Democrat politicians, no matter what the driver’s political preference.

At the other end of the spectrum, there are 100 percent independent operators who pay for their own equipment, buy their own healthcare insurance, and hold a motor carrier authority granted by the Department of Transportation (DOT). They’re free to operate anywhere, any time, and keep 100 percent of the fees they earn. Typically, they get their hauling gigs from specialized websites, or third-party logistics brokers who connect them with shippers who need stuff delivered. The most adventurous of all the drivers literally don’t know where their next gig is coming from, but it always does.

It’s the independents in the middle who are threatened by AB5. They make up the large majority of owner-operators. To smooth out the business bumps that come with being completely independent, they lease all their time to one motor carrier, who is responsible for keeping their schedule filled with deliveries. They might own their own equipment, lease it, or just lease their services, but they can only work for one carrier exclusively. There are also non-exclusive owner-operators, who own their own equipment and lease their skills and equipment to a carrier, but are also free to work independently.

When California Assembly Bill 5 was first passed in 2019, it was initially directed at Uber and Lyft, along with trucking companies and newspapers, forcing them to hire their contractors as employees, pay them a salary and benefits, and pass the costs on to you, the rider. On Dec. 31, 2019, one day before the law was to go into effect, the U.S. District Court for the Southern District of California put a restraining order in place that prevented it from being applied to motor carriers.

But in legal battles, it’s never over till it’s over. In May 2021, the Ninth Circuit Court of Appeals reversed the District Court’s decision, but allowed the injunction against the AB5 to remain in effect until the Supreme Court decided its merits.

Then, on June 30, 2022, the Supreme Court declined to hear the case. This essentially ended the lower court’s restraining order and made the California trucking industry and its 38 million customers the largest victims of AB5.

For 100,000 of the drivers who are paid employees, it’s business as usual. Same for the fully independent owner-operators who take care of all their expenses and find their own gigs. But for the vast majority of the 70,000 independents, their choices are drastic.

Truckers are an independent bunch, as their Canadian friends recently demonstrated by taking their grievances—along with their large vehicles—to the snowy streets of downtown Ottawa. So will they do the same, with a massive protest convoy to Sacramento? Hopefully. But will it get them work? No.

Can they just ignore the law and keep on working illegally? As much as they might be tempted, the motor carriers that hire them as independent contractors will likely back down and refuse to engage them, under threat of massive penalties.

So that leaves independent truckers with these tough choices:

None of these choices are any good for California’s independent truckers, or the Californians they feed and clothe. The most likely outcomes will be across the board increases in inflation and empty shelves in parts of California stores that have not seen shortages to date.

Is there any hope in all this? Only one glimmer that I can see. AB5 was supported and signed by a famous patron of the French Laundry who seems to be gearing up for a challenge to Joe Biden’s presidency in 2024. If the coming supply chain wreckage is as severe as I predict, it could finally put an end to Gavin Newsom’s dream of becoming President.

Greg Karraker
Follow
Greg Karraker is an advertising writer and creative director for well-known national brands. He is also the author of “The Little Picture: How Liberals, Progressives, and Twits in Local Governments Are Strangling America, and What to Do About It.”