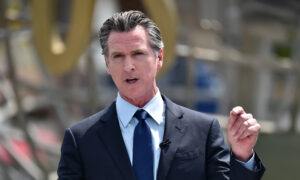 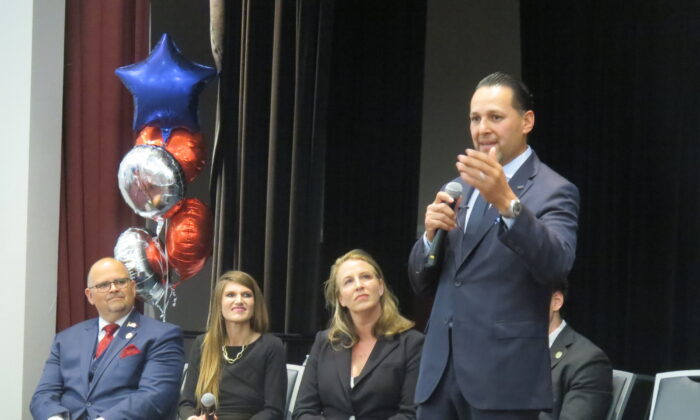 With the special election set for Sept. 14, the candidates also argued the necessity of recalling Gov. Gavin Newsom.

“I just want to say thank you very much to everyone who has built what is the greatest citizen’s movement in California history,” state Assemblyman Kevin Kiley (R-Rocklin) told a crowd of nearly 400 attendees.

The two-hour discussion allowed each candidate a one-minute block to answer questions by the moderator.

Anthony Trimino, who won the popular vote for the discussion panel, said he intends to collaborate and, if necessary, use leverage against the Democrat supermajority to comply with residents’ needs.

“Even though it’s a blue state, I believe there are more of us than them, but we haven’t been provoked until now,” Trimino told The Epoch Times.

“We’re going to work on eliminating the basis of ideology like critical race theory, sexuality in the classrooms, we’re going to reverse mask mandates for children, and we’re going to eliminate the vaccine passport. My position is if you want the vaccine, you can have it, but there should be no mandate to receive it.”

California’s population declined by 182,083 people in 2020, according to the Department of Finance. That’s the first time the state reported a decline since the department began collecting data in 1900.

Kiley said many Californians are fleeing the state because “political corruption … is impacting our quality of life in every way that you see around you.”

The impetus for recalling Newsom, Kiley said, comes from his losing touch with Californians and not governing in their interest when residents were “protesting the lockdowns in counties all around the state.”

School choice was a widely discussed topic during the forum. Many candidates said Californians are fleeing the state because the public school system is failing, as the state ranks 40th in the nation in K–12 education.

Working with a Democratic supermajority is complicated as a Republican, he said.

“I cannot overemphasize to you that experience in this level of government matters,” Ose said. “You’ve got to be able to see where the other side’s coming from.”

A Leader for the People

Stephens said she has spent years getting homeless off the street.

“We have the highest homelessness in the nation—175,000 homeless people here in California,” Stephens said.

For those with serious drug addictions, “the best thing for them is to put them into a program,” she said. “There is the Dream Center in LA that has an amazing success rate of transforming people’s lives.”

Businesswoman Jenny Rae Le Roux said she would have handled the CCP virus pandemic and lockdowns differently as governor.

“We would have had 43 counties open, 10 on watch, five closed, and allocated our resources in different directions. We would have used data throughout the pandemic to maintain freedom instead of constraining it.”

Businessman and pastor Tim Herode said Newsom “is not for ‘We the People,’ and when you’re hired by an employer and don’t do your job … you get fired.”

Herode said the more than $30 billion in unemployment fraud—and other crimes in the past year—may have been due to releasing prisoners and a call to defund the police.

“We have to be tough on crime … [and] we can’t defund our police and hire a social worker to take their place,” he said.

“Our frontline workers are out there protecting us, and we need to fund them and honor them for what they do and pay them a very competitive wage.”

“We actually need to bring back churches into our schools. … The answer is not throwing money into it,” she said.

Furin said that her experience working with teachers for much of her life adds to her ability to “reach across the line,” and work with Democrats, as most “teachers are Democrats.”

Diego Martinez said that as a small-business owner, he considered leaving the state due to overregulation and high taxes.

“We leave California because we can’t afford to live here,” he said. “We need to deregulate California, bring business back, lower our taxes and make California affordable.”

“We have legislators take our state and ruin it, and we have idly stood by. It’s time that we stand up together and fight for our state and stay in California.”

The event was hosted by the Pat Nixon Republican Women Federated.