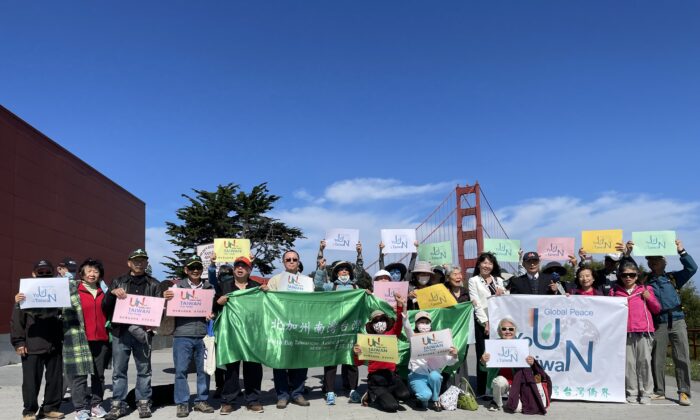 SAN FRANCISCO, Calif.—A group of Taiwanese in Northern California on a bus tour stopped by different tourist spots on Sept. 17 in order to raise support for Taiwan to join the United Nations.

“San Francisco has many famous tourist spots, and we want people from all over the world to hear our support for Taiwan to join the United Nations,” said Hanwen Li, who organized, and led the bus tour with a few dozen participants.

On Saturday, the bus tour stopped by several popular places such as the Golden Gate Bridge, and Fishermen’s Wharf in the city. Li is the coordinator of Northern California South Bay Taiwanese Overseas Communities.

Since the Chinese communist regime was recognized by the United Nations as the official representative of China in 1971, the status of Taiwan in the international community has been a politically-fraught question.

The Chinese Communist Party views Taiwan as part of its own territory, even though the island has been ruled as an independent entity for more than 70 years and has never been under communist control. The regime has also vowed to bring Taiwan into its fold, by force if necessary.

Because of this, the Chinese regime has engaged in an aggressive campaign to isolate Taiwan from the international arena, and pressure the remaining 13 countries that recognize Taiwan to switch their diplomatic recognition to China.

While the United States does not have formal relations with Taiwan, it maintains robust ties with the island under the Taiwan Relations Act, under which Washington is bound to provide Taipei with the means to defend itself.

“Out of all the places I have lived, Taiwan is probably the most civilized … that I have ever been to,” said Tamer Abuelata, an Egyptian American who joined the bus tour. Abuelata told The Epoch Times that he loves Taiwan, and has been to Taiwan three times.

Abuelata said Taiwan has freedom of speech, which people in China don’t have. In his trips to Taiwan, he found modernized public facilities and transportation systems, advanced education and environmental protection, and more importantly an “amazing” health care system.

He shared his personal story: when Abuelata went to Taiwan in March this year, he was in an accident in which he broke his chin and had to go to the hospital for a medical emergency. “It could easily cost you thousands of dollars without insurance in the U.S. But I was only charged $120,” Abuelata said.

Born in Egypt, immigrated to France when he was fours year old. Abuelata came to the United States in 2000 after high school and became a U.S. citizen in 2007. He believes Taiwan is a model of democracy and deserves strong support from the U.S. government.

Joe Zhou joined the bus tour as the president of the South Bay Taiwanese Association of Northern California. He said that the Chinese regime is similar to the Russian, which pays no respect to human rights and tries to use its military power to overthrow international orders. He hoped that Taiwan can build stronger relations with the United States, the European Union, Japan, and Australia so the island nation is fully prepared for a potential invasion from China. He believes that joining the United Nations should be a long-term goal.

Sophia Chuang, who joined the bus tour as Director of the Taiwanese Culture Center in Milpitas, said that regardless of the angles of the Ukraine war, supply chain issues, or the COVID pandemic, the world needs cooperation in order to survive many different crises.