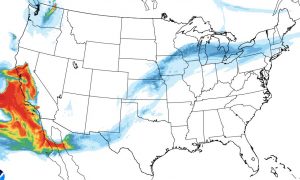 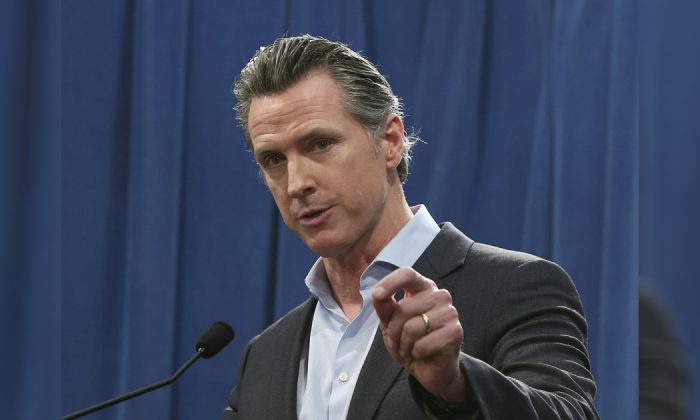 He called a state of emergency on March 22, giving the green light to 35 projects that the California Department of Forestry and Fire Protection (Cal Fire) must implement “without delay.”

Newsom, a Democrat, acknowledged that his executive order is controversial.

“I’m not naive. Some of these projects could literally, not figuratively, take two years to get done. Or we could get them done in the next two months,” he said at a March 22 news conference.

The 35 projects focus on more than 200 communities, according to a report by Cal Fire, and include actions such as removing dead trees, clearing vegetation, and creating fire breaks.

Our hots are getting hotter. Dries getting drier. Wets getting wetter.

Our climate is changing — we have to change with it. When fires strike or the earth shakes, CA needs to be prepared. Today, our admin modernized the way our govt responds and prepares for natural disasters. pic.twitter.com/MfBOTpxKQF — Gavin Newsom (@GavinNewsom) January 8, 2019

More than 25 million acres of California wildlands are classified as being under very high or extreme fire threat, threatening more than half the state.

“Fueled by drought, an unprecedented buildup of dry vegetation and extreme winds, the size and intensity of these wildfires [in 2017 and 2018] caused the loss of more than 100 lives, destroyed thousands of homes and exposed millions of urban and rural Californians to unhealthy air,” the report stated. “California must adopt an ‘all of the above’ approach to protecting public safety and maintaining the health of our forest ecosystems.”

The Cal Fire report cited a backlog in forest maintenance as one of the largest problems threatening as many as 15 million acres, adding that “funding limitations constrain what can be achieved.”

While Newsom has been openly critical of President Donald Trump on issues ranging from health care, offshore drilling, and border security, one thing they seem to agree on is the need to remove brush and logs that act as tinder for forest fires.

Today, CAL FIRE joined @GavinNewsom and other state & local leaders for a California For All Emergency Preparedness Press Conference in Lake County. https://t.co/IKYNSyd89Y

The Cal Fire report also cited active management of forests as being essential for controlling fires, which the former Secretary of the Interior Ryan Zinke said is a key prevention strategy. But Newsom and the president differ in how far they will go in working with the private sector to remove unwanted trees.

Trump signed an executive order in December 2018 that called for offering for sale at least 3.8 billion board feet of timber from USDA Forest Service lands.

Billions of dollars are sent to the State of California for Forest fires that, with proper Forest Management, would never happen. Unless they get their act together, which is unlikely, I have ordered FEMA to send no more money. It is a disgraceful situation in lives & money!

But the Cal Fire report only suggests increasing commercial logging on private land, and said that better management of state lands would be possible with updates to the state’s Forest Practice Act.

Trump has framed the issue as an economic one, not just because of the devastating effect that fires have on the economy and the costs to fight them, but because of a trade dispute with Canada over their subsidized lumber.

There is no reason for these massive, deadly and costly forest fires in California except that forest management is so poor. Billions of dollars are given each year, with so many lives lost, all because of gross mismanagement of the forests. Remedy now, or no more Fed payments!

While Canada has denied those claims, Trump has used the trade dispute to make the case that the United States could produce more of its own lumber if private companies had access to public land.

You can purchase the weekly print edition of The Epoch Times at these locations.