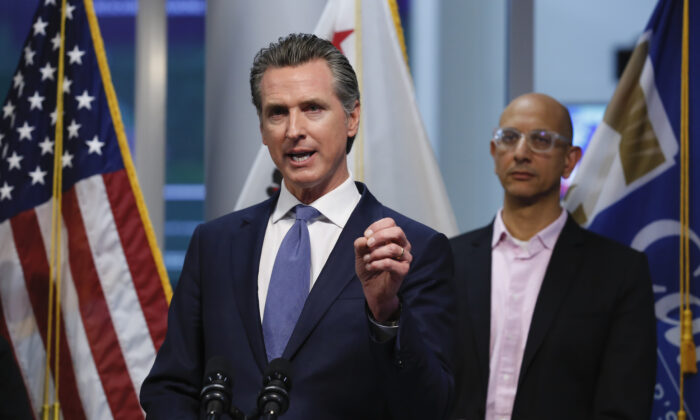 California Gov. Gavin Newsom give an update to the state's response to the coronavirus, at the Governor's Office of Emergency Services in Rancho Cordova Calif., on March 17, 2020. (Rich Pedroncelli/AP Photo)
By Isabel van Brugen

California Governor Gavin Newsom on March 19 issued a statewide “stay at home” order directing all 40 million residents to remain at their place of residence except for essential activities amid the growing pandemic.

The measure, effective Thursday night, was announced as he estimated that over 50 percent of California’s population—some 20 million people—will be infected with the CCP virus over the next eight weeks. California is the most populous U.S. state.

Newsom said that modeling suggests that some 56 percent of California residents are expected to be infected, requiring up to 20,000 hospital beds more than the state can currently provide.

Under the order, residents, except key workers, are advised to remain home at all times. Grocery and convenience stores, pharmacies, banks, gas stations, and laundromats will remain open, Newsom said. Restaurants will operate as delivery-only.

Newsom said the order, which he hopes will encourage “social distancing,” won’t be policed by law enforcement, but the other will rely on citizens to uphold a “social contract.”

“People, I think, recognize the need to do more and to meet this moment,” Newsom said.

The governor did not give a specific timeline for the “stay at home” order, stating that the main goal is to “bend the curve.”

“We want to get this curve down,” Newsom said. “That’s why it has been ordered without a specific deadline.”

Newsom said updates to the rapidly-changing situation would be announced in the coming days.

“This is a dynamic situation,” he said.

Newsom on Thursday addressed a letter to President Donald Trump which estimated that up to 25.5 million Californians will be infected with COVID-19 over an eight week period.

In a separate letter sent to U.S. congressional leaders, the governor asked for additional federal funding for unemployment insurance and social safety net programs and aid to small businesses, schools, and universities.

California state is one of the states hardest hit by the growing pandemic across the United States after Washington and New York. As of Thursday, 910 CCP virus cases were reported in the state, with 19 deaths.

Meanwhile, there have been 5,298 cases reported in New York and at least 1,376 COVID-19 cases in Washington.

The “stay at home” order had previously only been issued for San Francisco and surrounding counties as a measure to halt transmission of the deadly virus.

He asked the president to deploy the USNS Mercy hospital ship to the Los Angeles port until September “to help decompress our current healthcare delivery system in the Los Angeles region in response to the COVID-19 outbreak.”

Trump on Thursday suggested that the Chinese communist regime is to blame for the CCP virus, which has spread to more than 160 countries and territories around the world, killing thousands.

The World Health Organization (WHO) stated there was no evidence of human-to-human transmission on Jan. 14.