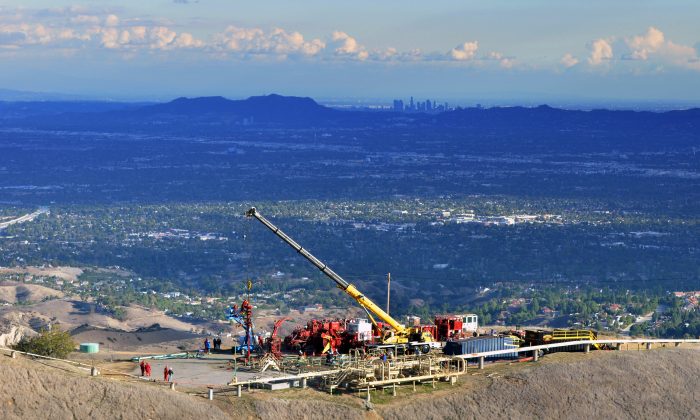 SoCalGas crews and technical experts attempt to safely stop the flow of natural gas leaking from a storage well at the utilitys Aliso Canyon facility near the Northridge section of Los Angeles on Nov. 3, 2015. (Javier Mendoza/SoCalGas via AP)
US

SAN FRANCISCO—California Gov. Jerry Brown declared a state of emergency on Wednesday, Jan. 6, over a massive natural-gas leak that has been spewing fumes into a Los Angeles neighborhood for months.

In a statement, Brown said he acted based on the requests of local residents in the community of Porter Ranch and the “prolonged and continuing” nature of the gas blowout at the underground storage facility.

The well, owned by Southern California Gas Co., has been gushing up to 1,200 tons of methane daily, along with other gases. The leak was first reported in October.

The utility is paying to relocate thousands of households after residents complained that the gases were making them sick. They say they have suffered nosebleeds, nausea, headaches, and other ailments.

Los Angeles County and the Los Angeles school board already have declared the crisis an emergency, moving students out of two schools in the neighborhood.

The massive leak amounts to about a quarter of the state’s total output of climate-changing methane.

Resident Matt Pakucko, the head of a community group that has been pushing for the state declaration, said he cried when he heard about the governor’s order.

Pakucko, speaking from a hotel where the gas company had moved him and his girlfriend, said he faced some doubts from his community about pressing the governor to declare an emergency. He said he had his own concerns that Brown might not take strong enough action but was pleased in the end.

“I’m not worried about being validated or vindicated, but that people get what they need,” he said. “And that’s what we’ve been pushing for.”

The governor’s move, among other measures, directs efforts by California agencies in stopping the leak, and it orders emergency regulations for other gas-storage facilities throughout the state.

The massive leak amounts to about a quarter of the state’s total output of climate-changing methane. The site is one of the country’s largest underground natural-gas storage facilities and can hold enough natural gas to fuel Southern California for a month.

Brown toured the site of the leak for the first time earlier this week. The governor previously resisted local calls for a state declaration, saying he wanted to make sure the utility, rather than the state, bore the financial cost.