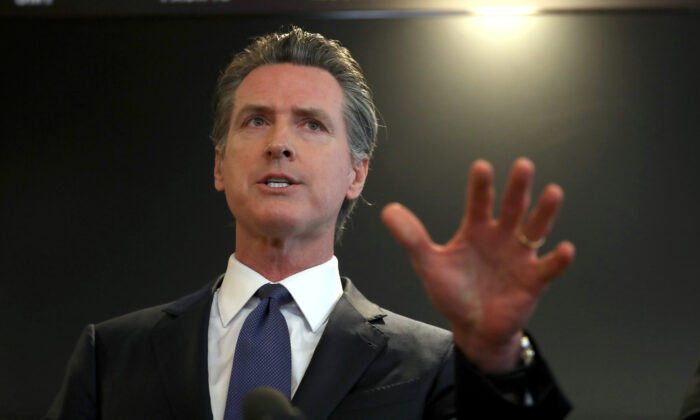 California Governor Calls on All Bars, Pubs to Close Over Coronavirus

Gov. Gavin Newsom called on all bars, pubs, breweries, and wineries in California to shut down over the Wuhan coronavirus, adding that there will be new restrictions on restaurants.

Restaurants will have their occupancy levels cut in half, he announced on Sunday night in a press conference, adding that people need to distance from one another. Senior citizens, people aged 65 and older, are asked to stay at home unless they have an emergency reason.

“We believe this is a nonessential function in our state,” Newsom said of bars. “And we believe that is appropriate under the circumstances to move in that direction.”

The governor said the call for shutdowns is “guidance” and said it isn’t a legal order. “If you want to establish a framework of martial law, we have the capacity to do that but we are not at this moment feeling that is a necessity,” he said.

“We are calling for the home isolation of all those 65 years or older and all those with chronic conditions,” Newsom during a press conference.

He also said there will be a process to transition homeless out of encampments to other settings such as motels and hotels.

Across the United States, the number of cases has surpassed 3,200 with more at least 62 deaths, according to data provided by Johns Hopkins University.

The governors of Illinois and Ohio on Sunday both announced the closure of all bars and restaurants, respectively.