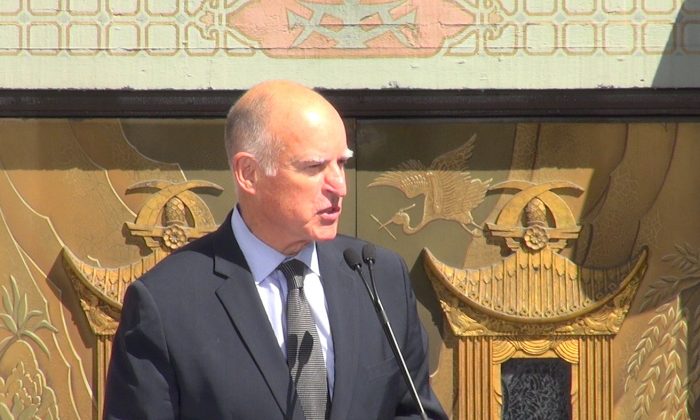 California Governor Jerry Brown makes a speech at the signing ceremony for AB 1839 on Sept. 18 at the TLC Chinese Theatre in Hollywood, Calif. The measure will increase tax incentives for film and television production in the state. (Wen Xue/NTD News)
US

“Today, we remind the world that the Golden State is the home of the silver screen,” said Governor Brown. “This bill helps thousands of Californians – from stage hands and set designers to electricians and delivery drivers.”

The law, AB 1839 attempts to stop production from leaving the state by more than tripling current annual funding from $100 million to $330 million, and expanding the number of projects that qualify. It will be in effect for five years beginning in fiscal year 2015-16.
The law will also end a controversial lottery system for picking applicants. Recipients will be chosen based on the number of jobs created and the project’s economic impact.

At the ceremony, Los Angeles Mayor Eric Garcetti, along with the bill’s sponsors, Assembly Members Mike Gatto, and Raul Bocanegra, praised the success of the measure.

“Production and production jobs aren’t running away from California, they’re being lured away by financial incentives from other states. But that stops today,” Garcetti said.

Industry representatives also shared their enthusiasm that the state has taken steps to keep film and television production in California.

“Over the last 20 years, our California has lost much of its film and television production work, and with it the solid technical and creative jobs that our industry provides,” said Steve Papazian, Warner Bros. Pictures’ President of Worldwide Physical Production.

“The legislation is a catalyst to grow those positions for the thousands of current and future crew members who want to work here and for the myriad small businesses that supply and support our industry every day.”

Gov. Brown had announced his support for the bill in late August, a few days before it was approved by the state Senate and Assembly.

California’s tax incentive funding will now be the second highest in the nation, behind New York’s $420 million annually, but beating out Louisiana’s competitive $251 million it spent last year.

From 2004-2012, film and television jobs in California have decreased by 12 percent, or more than 16,000 jobs, according to data from the Milken Institute.

Industry jobs in New York went up by 23 percent and jobs in Louisiana went up 73 percent in that same period.