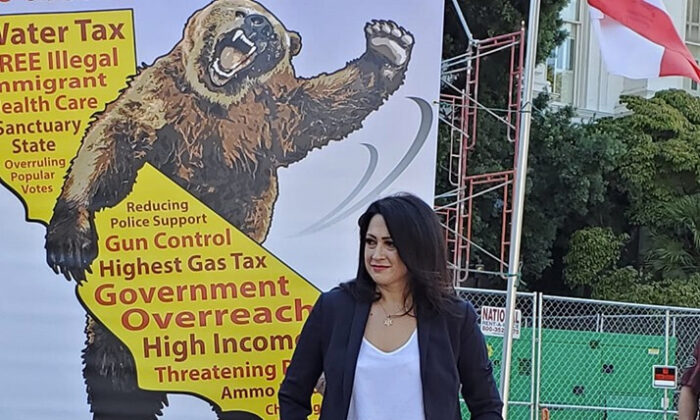 Erin Cruz at a Newsom recall rally in Sacramento on Oct. 5. (Courtesy of Erin Cruz)
By Nathan Su

SACRAMENTO, Calif.—Two separate petitions to recall Gov. Gavin Newsom were approved in September by the California secretary of state for circulation to collect required signatures from supporters.

One group is led by Erin Cruz, a Republican candidate currently running for California’s 36th congressional district. Cruz ran an unsuccessful campaign for the U.S. Senate in 2018 for Democrat Dianne Feinstein’s seat.

The second group is led by Dr. James Veltmeyer from San Diego. Veltmeyer was named as a Physician of Excellence by the San Diego County Medical Society. He formerly ran two unsuccessful campaigns for the U.S. Congress in Southern California in 2016 and 2018.

Either petition group, if successful in collecting enough voter’s signatures, can put its recall effort on next year’s ballot for an election. Both Cruz’s group and Veltmeyer’s group have urged their supporters to sign and to support both petitions.

Cruz told The Epoch Times in a phone interview: “The people of California want common sense leadership and practical solutions to the problems of today. They’re tired of out-of-control spending, high taxes, and regulations that prohibit them from living their lives here in the state of California. Many of them are afraid that they may have to leave [California]. We want Californians to be able to stay.”

Newsom, in his response to the recalls, stated: “Our budget is balanced. Our reserves are unprecedented. Our state economy and employment have hit historic highs.”

“He [Newsom] has proposed a $2 billion tax increase at the time the state has $20 billion budget surplus, including a water tax,” said Andrew Russo, a political consultant for Veltmeyer’s group.

Newsom signed SB-104 into state law in July, which will extend health care benefits to individuals 19 to 25 years of age regardless their immigration status. The bill will take effect in 2020. It’s estimated that this new legislation will cost California taxpayers about $98 million in its initial year.

The recall efforts immediately gained support from the New California state movement, which published a press release on Oct. 6 stating: “New California State welcomes the ‘Recall’ effort and supports the citizen’s right to recall the leader of a state government that is moving the state of California into socialism.”

The New California movement is a statewide grassroots effort to break most of California’s rural areas away from the current state and to form a new state. So far, representatives from 47 of the 58 counties in California have joined the movement. Fractions of five other counties have also joined.

The movement claimed its independence on Jan. 15 last year and claims to be following a constitutional process similar to what West Virginia followed in breaking away from Virginia in 1861.

The movement has been using the First Amendment right of petitioning the government for a redress of grievance and filing weekly grievances to counties involved in this process. So far, the movement has filed 88 grievances.

The movement has accused California’s sanctuary state policy of violating the U.S. Constitution Article IV, Section 4, which guarantees to every state in the Union protection against invasion.

Preston also stated that the movement will support the gubernatorial candidates who support the new state movement in the recall election.

To recall a state governor is not an easy process. In the history of California, there have been more than four dozen recall efforts against state governors. The only success was the recall election against Gov. Gray Davis in 2003.

According to California’s election law, in order to put a petition to recall a statewide elected official on the ballot for vote, the petition must be signed by registered voters equal in number to 12 percent of the last vote for the office.

Since close to 12.5 million votes were received in the state’s 2018 gubernatorial election, a petition to recall Newsom needs to receive about 1.5 million legitimate signatures in order for the recall to be put on next year’s ballot.

California election law also requires these signatures to be collected and submitted within 160 days after a petition is approved for circulation. This means either of the two petition groups should collect about 10,000 signatures a day in order to put the recall petitions on the ballot.

The deadline to submit the collected signatures for Cruz group will be February 13, 2020, and March 5, 2020, for Veltmeyer group.