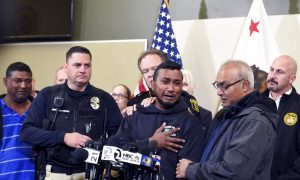 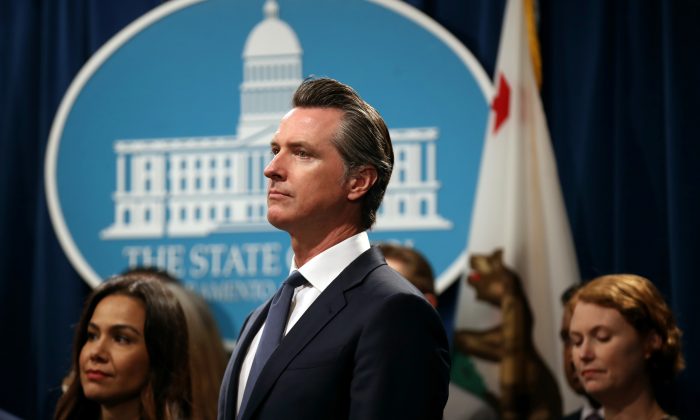 California Governor Gavin Newsom was criticized after he did not attend the funeral of El Dorado Sheriff’s Deputy Brian Ishmael, for whom at least two illegal immigrants have been indicted for his death.

Ishmael was shot and killed in the line of duty in Somerset, California, on Oct. 23, after responding to an early morning 911 call. According to The Sacramento Bee, a person had reported a marijuana theft at an illegal grow in the area. After arriving at the scene, Ishmael was hit with a bullet above his bullet-proof vest and died within a few minutes.

At a press conference on Thursday, El Dorado County Sheriff John D’Agostini criticized the Democrat governor for not attending the Tuesday memorial service.

“I want to note that, noticeably absent from my deputy’s funeral on Tuesday, was our governor,” he said.

When asked later whether he felt Newsom’s absence at the deputy’s funeral was a sign of disrespect toward the department and Ishmael’s family, he responded: “Absolutely. Very much so.”

“He had an important meeting with PG&E—and I understand that it is something that is affecting all of us in the north state—tremendously, my county as well,” the sheriff said. “But one morning out of his busy schedule to respect my deputy and his family, I don’t think is too much to ask.”

Newsom met with PG&E officials privately on Tuesday at the State Capitol, just days after he had threatened a state takeover of the utility. According to the California Globe, the main issue discussed was the increasing planned power outages in Northern California.

The utility received widespread public criticism for its power outages in early October that affected more than two million people in northern California.

Later on Thursday, the governor’s office said that he had sent representatives to the funeral, and also sent a letter to Ishmael’s family, The Sacramento Bee reported.

According to the Bee, two men—the one who had called 911, and an illegal immigrant—have been charged with Ishmael’s murder. Another illegal immigrant was also charged in connection with the murder.

They were among a total of four men who were indicted on Thursday on federal charges of conspiring to cultivate marijuana, cultivation of marijuana, and discharge of a firearm during and in relation to a drug trafficking offense.

The two illegal immigrants were Mexican nationals and they were each charged with being an illegal alien in possession of a firearm.

“Please call this what this is,” D’Agostini told reporters at the Thursday news conference. “Don’t soften it. This tragedy was due to an illegal alien tending an illegal marijuana garden who murdered my deputy. That’s what it is.”

He and other law enforcement officers also expressed that sanctuary laws in California had hindered their investigation, including that investigators were held back days from finding out the identity of the alleged shooter and his alleged accomplice.

“We shouldn’t have to go through these hurdles to try to figure out who two guys are from Mexico who just killed a deputy sheriff,” Scott said.

“I am angry because we have illegal aliens and illegal marijuana grow who killed a cop,” he added. “That is bad.”

The Trump administration had asked the U.S. Supreme Court to strike down SB 54 provisions (pdf) that prohibit state and local law enforcement officers from sharing information about an illegal immigrant’s release from custody, personal information, and physical description to immigration agents.

Moreover, the law also bars state and local officers from transferring these individuals to immigration agents except in exempted circumstances like under a court warrant.

The U.S. government argues that SB 54 “concededly ‘frustrate[s]’ and ‘obstructs’ federal immigration enforcement,” as it eliminates the chance for immigration agents from taking illegal immigrants into custody prior to release.

California has until Nov. 22 to respond to the petition.