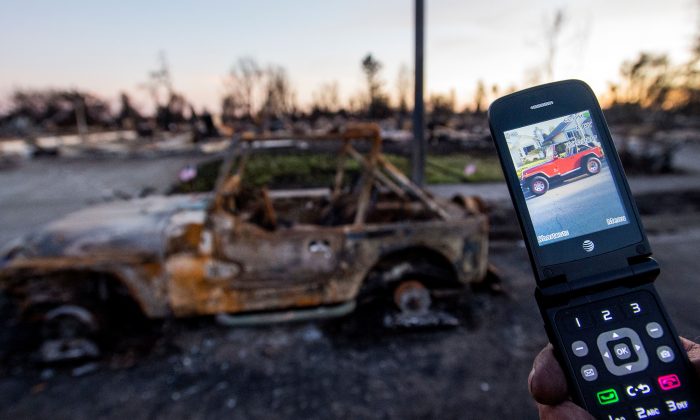 A man shows a photo of his burned Jeep on his cell phone in Santa Rosa, California on October 20, 2017. (JOSH EDELSON/AFP/Getty Images)
US

California governor Jerry Brown is leading the effort to push for a new 911 surcharge fee to maintain and improve emergency services.

Senate Bill 870 and Assembly Bill 1836 outline the new policy, which would require replacing an existing tax on in-state phone calls with a surcharge amount between $0.20 and $0.80 per month, starting Jan 1, 2019.

The upgraded 911 system will have the ability to process texts and video and to locate wireless callers, whose phone call will also be automatically sent to the nearest operable center, according to the Sacramento Bee. If an earthquake or fire damaged the cable, the new system would allow callers to reach 911 operators in other ways.

Currently, Californians are charged less than 1% of the cost of in-state phone calls to fund the 911 system. However, with more people using texting instead of calling, the number of phone calls is declining at an average rate of 6%, reported the Sacramento Bee. As a result, more funding needs to be raised to support the 911 system.

However, opponents argued that the new tax is unnecessary.

“911 services are in jeopardy because their funding hasn’t been made a priority in the budget,” said State Senator Joel Anderson in a statement. “With a $9 billion surplus, I believe the state has plenty of money to fund these important services. The Legislature doesn’t need to take even more money out of our pockets.”

On the other hand, supporters said that the new fee would be a more reliable way to fund 911 services compared to using the budget, which is subject to economic factors.