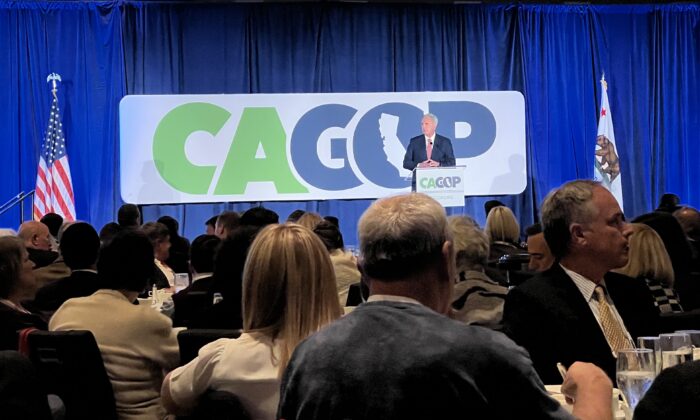 McCarthy praised Trump, bashed Democratic Party policies, and took a few jabs at the news media at a convention banquet on April 23. He alluded to news coverage alleging that he and other establishment Republicans had conspired to push then-President Donald Trump to resign after last year’s Jan. 6 protests in Washington, D.C.

“We are fighting a long fight. We were in the fight together. We will never back down. We are only 199 days from elections. The fate of liberty hangs in the balance,” he said.

On Thursday, the New York Times broke the story based on a book, “This Will Not Pass: Trump, Biden and the Battle for America’s Future,” written by reporters Jonathan Martin and Alex Burns.

The New York Times reported that McCarthy and Republican leaders, including Senate Minority Leader Mitch McConnell, initially sought to remove Trump from office after Jan. 6, but feared backlash from Trump and his loyal supporters.

“I’ve had it with this guy,” McCarthy told Republican leaders, according to the report.

Later that day, the New York Times reporters released a leaked audio recording of the Jan. 10, 2021, phone call to MSNBC and CNN. The recording revealed McCarthy telling U.S. Rep. Liz Cheney (R-Wyo.) and other Republican leaders he was considering a plan to ask Trump, who was facing a second impeachment hearing at the end of his four-year term, to resign.

Despite the controversy, California Republican Party Chairwoman Jessica Millan Patterson defended McCarthy at a press conference on Friday at the convention.

“I have no doubt that he will be the next Speaker of the House,” she told reporters. “He is an amazing leader. Not only do Californians need him right now, America needs him right now.”

McCarthy told more than 500 Republicans at the dinner on Saturday that California and the nation are suffering under “Democrat rule,” and called President Joe Biden, Vice-President Kamala Harris, House Speaker Nancy Pelosi and California Gov. Gavin Newsom “incompetent, out of touch, and irresponsible.”

He accused the Biden administration of mishandling foreign policy, encouraging illegal immigration, and called for an end to pandemic-related mandates at the April 22-24 convention in Anaheim.

If the Republicans expect to take control of the House and Senate in the 2022 midterms, they’ll have to fight hard, McCarthy said.

One of the first things, Newsom did when he took office in 2019 was decrease oil and gas production in California by 20 percent, McCarthy said.

McCarthy criticized education policies that he claims promote propaganda and “deny parents their rights to be involved.”

“We cannot afford more mandates,” he said, referring to masks, vaccines and lockdowns related to the COVID-19 pandemic.

“We cannot afford more crime in the streets or one more police officer killed in the line of duty,” McCarthy said.

He pointed to President Ronald Reagan tough negotiations with Russian leaders that preceded the fall of the Berlin Wall and the collapse of the communist Soviet Union, as an example of strong leadership and military strategy.

In contrast, he cited the Russia-Ukraine war, and failed rescue missions in Afghanistan, as examples of the Biden administration’s foreign policy failures. He portrayed Biden as weak and ineffective.

“The only thing I think Joe Biden has been successful at is making Jimmy Carter no longer the worst president,” he said.