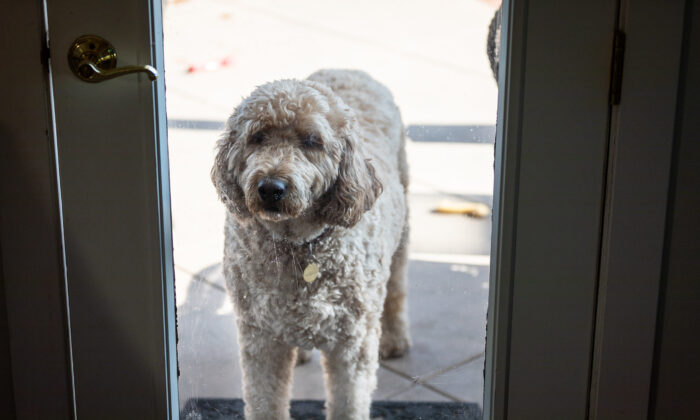 A dog stares into a home through a glass door in Coto De Caza, Calif., on Nov. 25, 2020. (John Fredricks/The Epoch Times)
Southern California

A new, first-of-its-kind state law makes it a misdemeanor to misrepresent pets as service animals.

Lawmakers and animal organizations, including Guide Dogs for the Blind and Canine Companions for Independence, say the new rules target the growing online sale of fraudulent emotional support and service animal certificates.

“By ending the practice of misinformation and fraud that has occurred with the sale of emotional support animals and service dogs, we can create a safer community for all,” bill co-sponsor Assemblywoman Laura Friedman (D-Glendale) said in a statement.

California law doesn’t give emotional support animals the same rights as service animals, and the new law mandates that sellers and doctors make sure potential owners of these animals are aware of this. For example, establishments are not required to accommodate emotional support dogs, unlike service dogs.

The bill requires doctors to treat their patients for at least 30 days, be licensed, and complete a clinical evaluation of the patient before they can write the required letter of support for them to acquire an emotional support animal.

Anyone who knowingly and fraudulently represents a dog as a guide, signal, or service dog can be charged with a misdemeanor and face up to six months in jail and up to a $1,000 fine.

The new law will also require that doctors and providers tell potential owners that fraudulently representing the pet as a service, guide, or signal dog is a misdemeanor.

“This law will curtail selling fraudulent tags and certificates for untrained dogs, a practice that has confused people with false promises of access for their dogs to restricted public spaces such as restaurants, stores, planes, and public buildings,” Rabih Dow, director of advocacy and outreach for Guide Dogs for the Blind, said in a statement.

The new law is just one of many that will take effect starting Jan. 1. Residents and businesses in the state will also face new minimum wage requirements, restrictions on recycling, and other new rules.

Other California Laws That Start Jan. 1

A new state law, dubbed the “Bacon Law,” is the second part of Proposition 12, which was passed in 2018. Beginning in January, producers may be required to provide cage-free living for egg-laying hens and 24 square feet for each pig they breed.

Grocers and restaurateurs are suing to force a 28-month delay of the law, citing fears of price increases and job loss.

New changes to California’s recycling laws include the required household separation of organic waste. Starting Jan. 1, SB 1383 bars residents from discarding food waste with other waste in an effort to reduce greenhouse gasses produced at landfills.

Restaurants and other businesses with liquor licenses will be allowed to continue selling to-go alcohol for another five years. Gov. Gavin Newsom signed SB 389, extending the pandemic-era law until Dec. 31, 2026.

Beginning Jan. 1, California’s new minimum wage will increase to $14 for employers with 25 employees or less, and $15 for businesses with 26 or more.

Helmets and Lights for Horse Riders

At the start of the year, people under 18 riding a horse on paved highways will be required to wear a helmet. AB 974 also requires anyone riding on the roadways at night to wear reflective equipment or a light.

All Voters Get a Mailed Ballot

California will require elections officials to mail ballots to all registered voters for every election. AB-37 also allows any registered voter to vote by mail for any election. The new law, which starts Jan. 1, also sets minimum standards for all drop boxes.

A first of its kind in the nation, a new state law that starts Jan. 1 will make “stealthing” a sexual battery. Stealthing is the nonconsensual removal of a condom during sex. Victims will be able to sue for damages in civil court.

California’s new AB 1023 law will require all contractors and subcontractors on public works projects to be able to provide their payroll records electronically.

California’s new Genetic Information Privacy Act will expand an existing state law Jan. 1 that requires companies that hold data on Californians to disclose when the data has been breached. The new rules will also require the same for companies that collect genetic data, such as data from family ancestry tests.

The law will also require the consumer’s written permission before their genetic information and DNA can be sold to a third party by these services.

Food Delivery Drivers to Get Their Tips

A new law in California that starts Jan. 1 will make it illegal for food delivery apps to keep any portion of a tip or gratuity that is meant for the driver. For pickup orders, the tips will go directly to the restaurant.

Police to Lose Certification for Misconduct

A new state law that starts Jan. 1 will allow the state’s law enforcement accrediting agency to decertify officers for misconduct, including banning them from law enforcement for sexual assault, perjury, and the wrongful killing of civilians.

Can I Get Some Ketchup With That?

California’s new law AB 1276 makes it illegal for restaurants to freely hand out condiments or plastic utensils to customers. Starting Jan. 1, customers must ask for these items.