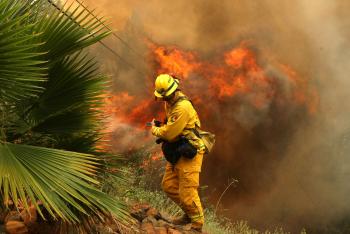 A California Department of Forestry photographer shields himself from a flame as a spot fire burns through trees and brush July 10, 2008 in Concow, California. (Justin Sullivan/Getty Images)
US

By Ivan Velinov
Print
LOS ANGELES, Calif.—As additional firefighting resources from as far away as New Zealand, Australia, Greece, and Mexico have arrived to assist the exhausted firefighters in California, officials confirmed on Tuesday that firefighters are on their way to taming the California blazes, as the weather conditions improved throughout the bone-dry state.

So far over 2,000 fires have been contained due to the endless efforts of firefighters, California Department of Forestry and Fire Protection officials said. Isolated thunderstorm activity occurred on Tuesday in the Sierra Nevada range producing numerous lightning strikes making officials worried about more firestorms.

As of Tuesday evening, fire officials said that nearly 80 fires are still active, but that the three most dangerous blazes are almost fully contained as the weather conditions in the region eased with higher humidity and lower temperatures.

More than 870,000 acres, or 1, 350 square miles, have been consumed making the crisis the largest in the state’s history. At least one hundred structures were destroyed and one person perished in the recent blazes.

In terms of loss of life and property, however, the ongoing crisis seem smaller compared to California’s firestorms last October when eight people perished, 2,000 homes were burned, and the property damage mounted up to $2 billion.

As the weather conditions turned back in favor of the firefighters, the fire threatening the Butte County town of Paradise, 90 miles north of Sacramento, was no longer threatening homes and was 70 percent contained. The forest inferno destroyed 50 residents’ buildings and outbuildings and scorched 53,000 acres, and is expected to be fully contained by July 24.