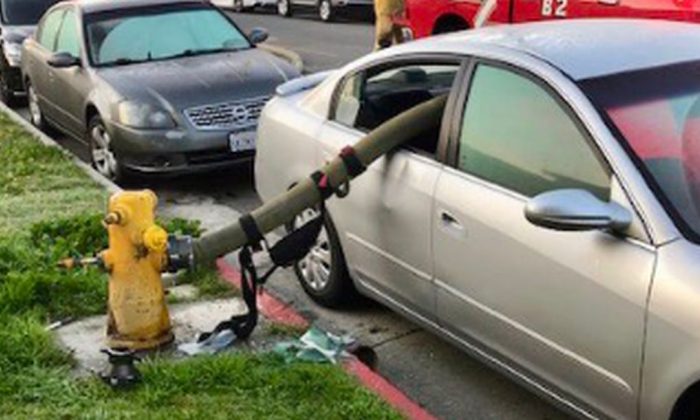 Anaheim police and fire officials issued a warning to drivers this week. (Anaheim Fire and Rescue)
US News

Fire officials in Anaheim, California, issued a stark yet humorous warning to drivers after firefighters broke the windows of a car and ran a hose through the vehicle.

Photos posted by the Anaheim Fire and Rescue showed a hose going through the car that was illegally parked in front of a hydrant.

“Ever wonder what happens when a car is parked in front of a fire hydrant and a fire breaks out? Is a closer parking spot worth the broken windows and the citation and towing fees?” asked the office.

Ever wonder what happens when a car is parked in front of a fire hydrant and a fire breaks out? Is a closer parking spot worth the broken windows and the citation and towing fees to @AnaheimPD? @City_of_Anaheim residents please do not park in fire lanes pic.twitter.com/Q96E4gfTOR

It then urged residents not to park in fire lanes.

Anaheim police retweeted the photos and told drivers that red curbs exist for a reason.

No other details were released about the incident.

APD assisted our partners from @AnaheimFire on a working residential structure fire this morning in the 1100 blk of N. West St. they had to run a hose line thru a car’s windows because it was parked in front of the hydrant. There is a reason the curbs are RED people https://t.co/vSXmtBjNXW

Two pictures of the same door show the difference between life and death in the event of a house fire, according to one fire department.

The Cold Spring Fire Department in New York posted the pictures on social media, suggesting parents get their kids to shut their bedroom doors at night, stirring up a lot of discussion.

The pictures, posted on Jan. 30, show the same door, from outside in the corridor, and inside the bedroom. Inside, the white door has remained virtually untouched as the surrounding frame has turned black. Outside, the door is black with charring and soot.

“As a parent it’s hard to convince little kids to sleep with the door closed, they always want it open just a little,” wrote the fire department in the post accompanying the pictures.

“I do a lot of fire prevention at schools, so one thing I try and stress to the kids is, how important it is to sleep with the doors closed.”

The photographs are from a house fire in Fairfield, NY.

Although a few commented that it was impractical to keep kids bedrooms doors closed for other safety reasons, most of the hundreds of comments were thankful to the fire department for raising awareness.