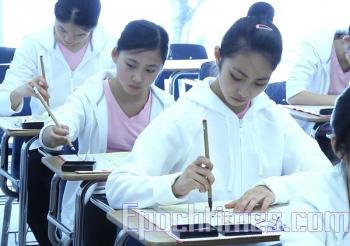 Students practicing calligraphy in Fei Tian Academy of the Arts California. (The Epoch Times)
US

California Fei Tian Academy of the Arts Opens Its Doors

Principal Fengxuan Cao spoke about the dance hall, which has been designed and equipped according to the highest standards to enable students to practice well in a safe environment.

San Francisco School District physical education teacher Trent Fechter commented, “I am surprised to see the school's high-quality equipment. It is world class. I’ve never seen anything better. ” He said many teachers will bring their students not only because of the excellent equipment, but also to have them learn traditional Chinese culture and dance.

Mr. George Tu from the National Chung Hsing University Alumni Association of Northern California is a ballroom dancer. Mr. Tu said the California Fei Tian Academy of the Arts has impressed him a great deal: The equipment is A+; the faculty is world class, and the curriculum fits different age groups.

Deputy Director General Mr. Philip Lee of the Taipei Economic and Cultural Office in San Francisco spoke highly of the school’s contribution for promoting classical Chinese arts and culture and added, “I hope to see more and more Fei Tian Academies around the world.”

Ms. Cao told the attendees that most of their faculty members come from the world-renowned Shen Yun Performing Arts. “Fei Tian Academy of the Arts provides the most integral, rigorous, engaging, and outstanding training in classical Chinese dance. It has produced many outstanding professionals in recent years."

She also noted that Fei Tian Academy of the Arts not only teaches authentic classical Chinese dance but also emphasizes traditional Chinese virtues and culture.

Ms. Cecilia Xiong, dance teacher at the California Fei Tian Academy of the Arts, was a lead dancer for the Shen Yun Performing Arts and has traveled around the world with Shen Yun for years. She commented, “The dance of Shen Yun displays pure truth and compassion and carries the messages of hope and beauty.”

Ms. Xiong expressed her wish to promote traditional Chinese culture through her teaching—something she enjoys tremendously.

The academy has prepared a wide range of summer classes for children over 9 years. Classes include half-day intensive classical Chinese dance, and half-day academic topics, such as English, math, and traditional Chinese culture.

Principal Cao mentioned that the traditional Chinese culture classes are one of a kind. Classes such as Chinese history, Chinese idioms and allusions, ancient Chinese poems and music, calligraphy, and embroidery have attracted enthusiastic parents and students.

Students can choose from two Summer Program sessions. The first session runs from June 21 through July 23; the second from July 26 through Aug. 20. There are options for either half-day enrollment or full-day enrollment. The school will provide room and board for out-of-state students.

If you want your children to experience premier art institution with world-class instructors from Shen Yun Performing Arts, and the opportunity to grasp the essence of traditional Chinese culture, bring them to the Fei Tian Academy. They will have an unforgettable summer.