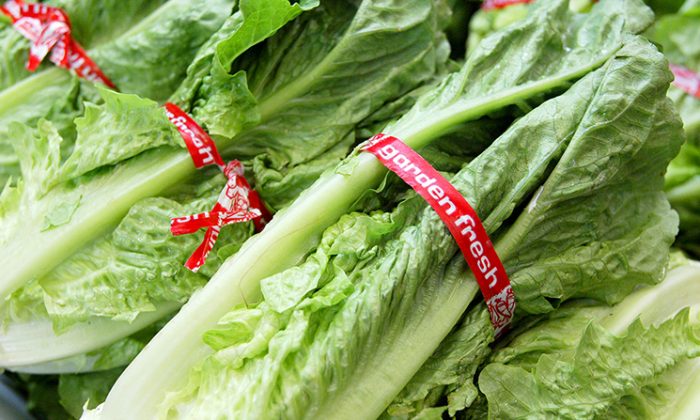 The produce was harvested between Nov. 27 and Nov. 30, the company said in a press release (pdf). The recall is due to possible E. Coli contamination, although none of it has tested positive for the bacteria.

The voluntary recall was initiated after sediment from a reservoir near where the lettuce and cauliflower was grown tested positive for E. coli.

“Filtered and treated water from the reservoir may have come in contact with the produce after it was harvested,” the company said. “None of the filtered, treated water has tested positive for E. coli.”

The Food and Drug Administration (FDA) said on Dec. 14, that 59 people in 15 states have now been sickened by the tainted lettuce, which also spread into Canada, and that additional farms are likely involved in the outbreak. The last illness was reported on Nov. 16.

Officials from the FDA and the Centers for Disease Control and Prevention are still trying to determine how the water from the reservoir, which is used to irrigate the crops, became contaminated.

“It’s important to note that although this is an important piece of information, the finding on this farm doesn’t explain all illnesses and our traceback investigation will continue as we narrow down what commonalities this farm may have with other farms that are part of our investigation,” the FDA said in a press release.

“While the analysis of the strain found in the people who got ill and the sediment in one of this farm’s water sources is a genetic match, our traceback work suggests that additional romaine lettuce shipped from other farms could also likely be implicated in the outbreak.”

Because the outbreak started in late November, officials said that romaine lettuce from three counties possibly involved in the outbreak is likely safe, as long as it was harvested after Nov. 23.

The counties are San Luis Obispo, Santa Cruz, and Ventura.

The outbreak likely originated in Monterey, San Benito, and/or Santa Barbara Counties, officials said. The latter is where Adams Bros. Farms is located.

E .coli are bacteria found in foods, intestines, and the environment. Many strains are harmless but others can make humans sick.

People usually get sick from E. coli between two and eight days after swallowing the germ and some people who get sick may develop a type of kidney failure called hemolytic uremic syndrome, according to the Centers for Disease Control (CDC).

The infection is usually confirmed by testing a stool sample.

“Sometimes the contact is pretty obvious (working with cows at a dairy or changing diapers, for example), but sometimes it is not (like eating an undercooked hamburger or a contaminated piece of lettuce),” the CDC said.

“People have gotten infected by swallowing lake water while swimming, touching the environment in petting zoos and other animal exhibits, and by eating food prepared by people who did not wash their hands well after using the toilet. Almost everyone has some risk of infection.”