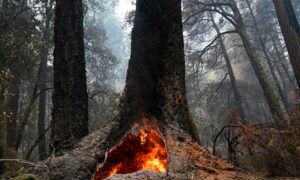 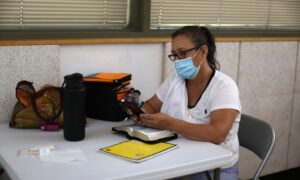 In California Heatwave, Pandemic Makes It Hard to Cool Off
0 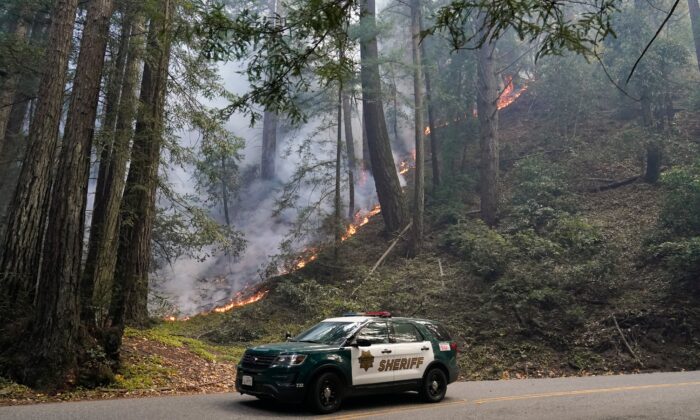 A police vehicle is seen under a forest being burned by the CZU August Lightning Complex Fire near in Bonny Doon, Calif., on Aug. 24, 2020 (Marcio Jose Sanchez/AP Photo)
US News

VACAVILLE, Calif.—California’s firefighting agency is in talks with the National Guard and California Conservation Corps about providing reinforcements as an already devastating wildfire season threatens to get even worse.

Lightning-sparked fires that have grown to some of the largest in state history have pushed firefighters to the breaking point as they also deal with complications from the coronavirus pandemic and depleted inmate crews.

“Historically it’s September and October when we experience our largest and our most damaging wildfires. So to be in the middle of August and already have the second- and the third-largest wildfires in our state’s history is very concerning to us,” Daniel Berlant, chief of wildfire planning and engineering at the California Department of Forestry and Fire Protection, said Tuesday.

Firefighters in wine country north of San Francisco have cleared containment lines—used to prevent fires from spreading—around a quarter of the fires there that have scorched nearly 557 square miles and destroyed nearly 980 buildings. It is now the third-largest blaze in California history.

To the east of San Francisco, firefighters created containment lines around 20 percent of a group of fires that have charred 571.5 square miles, making it the second-largest in state history.

And to the south, officials said progress was made against fires in San Mateo and Santa Cruz counties that have grown to more than 124 square miles, destroyed 319 homes and other buildings, and threatens another 25,000.

People were trickling back to the outskirts of Vacaville to see what remained of their homes. Art Thomas, 76, said he found only ashes and melted metal at the site of the home he built with his own hands in a rural area where he had lived for 32 years.

“Possessions dating back to when I was a kid were all in the house, everything is gone,” Thomas said. “Between sad, crying, laughing every emotion is there.”

He said he had left with his wife, two dogs, and a pair of shorts and tennis shoes.

Bob Zupo’s house survived, unlike the homes of three of his neighbors. But all the land around his property burned along with a barn he owned.

Zupo, 68, attributed his good fortune to “the grace of God.” He hung a sign on his mailbox that said, “Thank You All,” and put up an American flag as he assessed the damage.

With limited crews to tackle fires on the ground, the state has been relying more on bulldozers, aircraft, and firefighters from other states, and the federal government, Berlant said.

“We are having ongoing discussions with the National Guard as well as with the (California Conservation Corps) on how we can expand, if needed, the number of crews,” he said.

The hand crews do what Gov. Gavin Newsom calls “the really hard grunt work”—using chainsaws and hand tools to scrape and cut road-like clearings through grass, brush, and trees in remote areas in hopes of stopping the spread of a wildfire.

The severe challenges have occurred even before the traditional peak of fire season, when hot, dry autumn winds can send flames roaring faster than any attempts to contain them.

“We have to continue to plan for seeing if there are additional resources” not only within California, but what would be quickly available from nearby states, Berlant said.

Despite the size of the current fires, California has benefited because the three huge fire clusters are all in the northern part of the state and began just as firefighters could be redeployed after wrapping up several blazes in Southern California, Berlant said.

Tim Edwards, president of the union representing state firefighters, said 96 percent of Cal Fire’s resources are committed to fighting the fires. He was with a three-man fire engine crew that had traveled more than 400 miles from Riverside County to help fight the wine country wildfires.

“Between the fires in Southern California and these, they’ve been going nonstop,” he said. “Fatigue is really starting to set in, but they’re doing it.”

By Tuesday, more than 280 hand crews, each with 12 to 20 firefighters, were deployed to the lines by Cal Fire, the conservation corps, state corrections department, and U.S. Forest Service.

About 300 Guard troops were finishing firefighter training and were expected to be on the lines Wednesday as another 300 begin four days of training, said spokesman Lt. Col. Jonathan Shiroma.

California has scrambled over recent years to field enough prison fire crews as their numbers dwindled while the state released lower-level inmates. Thousands more were released early as the state responded to the coronavirus pandemic.

The number of inmate firefighters is down nearly 30 percent from last year, from 1,895 to 1,354, said corrections department spokesman Aaron Francis.

However, a dozen inmate firefighting camps that had been forced to shut down in June for two-week quarantines because of the coronavirus are back in operation, meaning all 43 camps are operating but at about 40 percent of capacity, Francis said.

“During this extreme fire activity it’s all hands on deck,” Berlant said.

By Don Thompson and Haven Daley