WASHINGTON—As the Trump administration has worked to cinch up the porous southern border and remove illegal aliens—especially convicted criminals—California has deliberately moved in the opposite direction.

But now the state is facing a backlash, as cities and counties within the Golden State are rising up against its sanctuary policies.

President Donald Trump is calling it a “revolution.”

Several cities and counties have passed resolutions to sue California for its sanctuary state bill, SB 54, which came into effect on Jan. 1.

SB 54 forbids local and state law enforcement to communicate and cooperate with immigration authorities, with few exceptions. Law enforcement officers are subject to civil action if they violate SB 54, including by communicating with Immigration and Customs Enforcement (ICE) about illegal aliens in their custody.

I understand that we have a wide variety of political opinions out there on immigration. But the law is in the books and its purpose is clear.
— Jeff Sessions, U.S. attorney general

The Department of Justice filed a lawsuit against California on March 6, saying three California bills, including SB 54, intentionally obstruct and discriminate against the enforcement of federal immigration law.

On March 19, the small city of Los Alamitos in Orange County kicked off a wave of anti-sanctuary defiance by passing a resolution that allows city residents and agencies to ignore the state’s sanctuary laws.

Orange County, which is just south of Los Angeles, was quick to follow suit. County Supervisor Michelle Steel said she has instructed the county council to look into which option is better: joining the Department of Justice in its lawsuit against California, or suing the state independently.

“The local police officers’ hands are tied because of SB 54,” she said on April 20. “Usually when they are illegal criminals, we hand them to ICE.”

But due to SB 54, she said, instead of transferring prisoners to ICE for deportation, the county sheriff has had to release 172 criminal aliens into the county from Jan. 1 through March 19.

“I don’t want this to happen in Orange County, because public safety is most important and a government’s priority is protecting its own citizens,” Steel said.

She said most of her constituents support the resolution, but she has been called a racist, and worse, by critics who say she is “immigrant bashing.”

“It’s not. This just totally comes down to public safety,” she said. Steel is a first-generation Korean-American immigrant.

On March 26, the Orange County Sheriff’s Department said it was going to start posting publicly the dates it intends to release inmates.

“This action will enhance communication between the Sheriff’s Department and our law enforcement partners to remove dangerous offenders from our community,” the statement said.

“SB 54 makes local law enforcement’s job more difficult and requires bureaucratic processes that could allow dangerous individuals to fall through the cracks of our justice system,” said Sheriff Sandra Hutchens, in the press release. “My department, however, remains committed to cooperating fully with federal authorities in all areas where I have discretion to remove serious criminals from our community.”

Orange County is now bracing for a lawsuit from the American Civil Liberties Union, which has already sued Los Alamitos, only days after the city’s resolution was passed. Los Alamitos Mayor Troy Edgar started a GoFundMe page to raise money for legal fees. It had raised more than $20,000 of its $100,000 goal by April 23.

Huntington Beach Mayor Mike Posey announced on April 3 that his city council is the first to file a lawsuit directly against the state, calling SB 54 an “unconstitutional overreach.”

“Mayor Pro Tem Peterson and I both believe in the sanctity of the Constitution and its applicability, and that all Huntington Beach residents are deserving of protections under the California and U.S. constitutions,” Posey said in a statement, adding that Huntington Beach law enforcement policies remain unchanged.

Trump tweeted his support for San Diego County on April 19 after it joined the anti-sanctuary movement.

“Thank you San Diego County for defending the rule of law and supporting our lawsuit against California’s illegal and unconstitutional ‘Sanctuary’ policies,’” he wrote. “California’s dangerous policies release violent criminals back into our communities, putting all Americans at risk.”

Thank you San Diego County for defending the rule of law and supporting our lawsuit against California's illegal and unconstitutional 'Sanctuary' policies. California's dangerous policies release violent criminals back into our communities, putting all Americans at risk.

California Gov. Jerry Brown, a Democrat, and Trump are at loggerheads over immigration enforcement and frequently trade barbs over Twitter.

On March 31, after Brown pardoned five convicted alien criminals, which shields them from deportation, Trump wrote in a tweet: “Governor Jerry ‘Moonbeam’ Brown pardoned 5 criminal illegal aliens whose crimes include (1) Kidnapping and Robbery (2) Badly beating wife and threatening a crime with intent to terrorize (3) Dealing drugs. Is this really what the great people of California want?”

Sessions traveled to Sacramento on March 7 to announce the lawsuit and ripped into Brown and other pro-sanctuary politicians.

“I understand that we have a wide variety of political opinions out there on immigration. But the law is in the books and its purpose is clear,” Sessions said. “There is no nullification. There is no secession. Federal law is the supreme law of the land.”

“If a jurisdiction won’t accept the deportation of someone who enters illegally and then commits another crime, then who do they think should be deported?” he said.

Aside from SB 54, the Justice Department is suing California for two other sanctuary bills. One is Assembly Bill 450, which prohibits private employers from voluntarily cooperating with federal immigration officials. California Attorney General Xavier Becerra warned business owners that they face a fine ranging from $2,000 to $10,000 if they cooperate with ICE.

The other, Assembly Bill 103, imposes a state-run inspection and review scheme of the federal detention of aliens who are held in state and local facilities.

California had already instituted policies to go easy on illegal aliens. In 2014, Brown signed a bill that reduced the maximum sentence of a misdemeanor to 364 days, down from 365. Immigrants—legal and illegal—are subject to expedited deportation if they receive a sentence of 365 days or more.

Becerra, a Democrat, has been outspoken against the administration’s attempts to enforce immigration laws, saying it erodes public safety.

“California laws and policies do not provide ‘sanctuary’ for criminals,” Becerra said in a statement on March 14. “We aggressively go after criminals, regardless of their immigration status.”

He said, “What we do not do, though, is the job of federal immigration agents. We’re in the business of public safety, not deportation.”

However, Sessions said he just wants California to stop intentionally obstructing the enforcement of federal immigration law and let ICE do its job.

“We are not asking you or anybody else to enforce our immigration laws for us,” he said.

Citing public safety, Oakland Mayor Libby Schaaf sent out a public alert on Feb. 24 to warn illegal immigrants that ICE was preparing an immigration operation in the area.

Schaaf said she was sharing the information “not to panic our residents but to protect them.”

“I know that Oakland is a city of law-abiding immigrants and families who deserve to live free from the constant threat of arrest and deportation,” Schaaf said. “I believe it is my duty and moral obligation as mayor to give those families fair warning when that threat appears imminent.”

But Jessica Vaughan, director of policy studies at the Washington-based Center for Immigration Studies, said a warning like that from a public official is “very irresponsible.”

“ICE is targeting primarily criminals who have been released by sanctuary policies in the Bay Area, and so the mayor is really tipping off criminals that ICE is seeking,” Vaughan said on Feb. 26.

“The ironic thing about officials like this mayor—who implement sanctuary policies—is that they say they do it because they want all immigrants in the community to feel safe,” she said.

“Well, this has the opposite effect. They feel less safe because they feel they are vulnerable to an enforcement action that is probably not even directed at them. It’s only directed at the criminals, in most cases, or people with egregious immigration violations.”

Days after Schaaf sent out her alert, ICE arrested 150 individuals in the San Francisco area who were in violation of immigration laws.

About half of those arrested had criminal convictions, including convictions for assault and battery, crimes against children, weapons charges, and driving under the influence, according to ICE.

But about 860 criminal aliens and public safety threats remained at large in the community, said Acting ICE Director Tom Homan.

“I have to believe that some of them were able to elude us thanks to the mayor’s irresponsible decision,” Homan said in a statement on Feb. 27.

Homan has been outspoken about California’s sanctuary status and has pledged to dedicate more ICE resources to sanctuary jurisdictions.

On April 13, the Justice Department issued a further warning to Oakland, as well as Seattle, the District of Columbia, and the state of Vermont. The department had already sent out 23 similar letters in January, including nine to jurisdictions in California, as well as to the state itself.

The department is seeking proof from the jurisdictions that they do not unlawfully restrict information sharing by their law enforcement officers to federal immigration authorities.

If the jurisdictions violate 8 U.S. Code 1373—a federal statute that promotes information sharing related to immigration enforcement—they may be ineligible for federal Byrne JAG award funding, which contributes to public safety operations.

For now, without any substantial immigration reforms passed by Congress, the Trump administration is trying to plug the gaps within its reach, while issues are battled out in court. 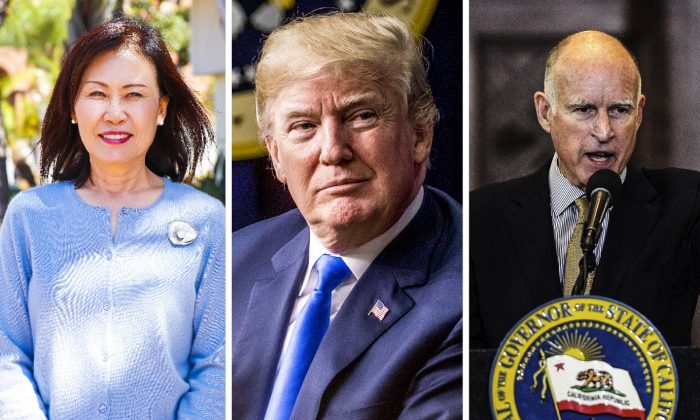