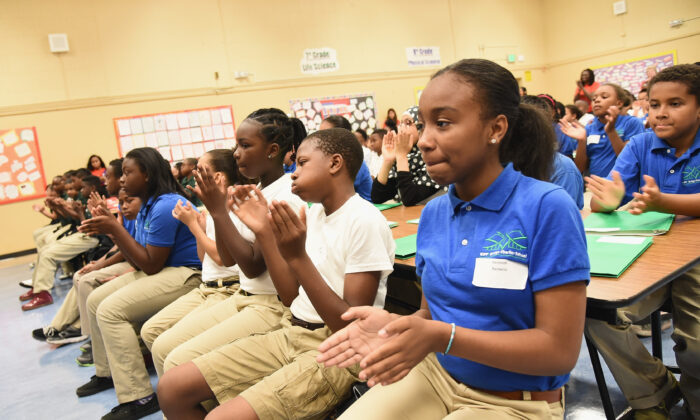 Has it been 30 years? I remember in 1992 writing articles advocating charter schools for California. That year, state Sen. Gary Hart, a progressive Democrat, sponsored a bill establishing 100 charters. The teachers’ unions opposed it like a swarm of hornets going after a 10-year-old who poked their nest.

It passed anyway because parents demanded reforms. Gov. Pete Wilson, a Republican, signed it into law. It was the second charter law in the country, after Minnesota’s, which allowed only eight charters.

Despite continued opposition from the unions, charters have grown and grown. According to the California Department of Education, “As of the beginning of the 2021–22 school year, more than 1,300 charter schools and seven all-charter districts are operating in California.”

Charters are public schools that largely operate outside the state’s labyrinthine Education Code. They are more responsive to student needs and parental oversight. And they have provided crucial competition to regular public schools, forcing those to improve.

Charters also provide something critical: They are fairly easy to shut down if they don’t perform. By contrast, traditional public schools are almost impossible to shutter no matter how bad they might be.

A new report card from the Center for Education Reform gives California charters a “C” grade among the 50 states. Obviously this state could perform better. But given the continued union attacks on charters, a “C” is passable, for now anyway.

It’s the “National Charter School Law Rankings & Scorecard – 2022.” It scores each state on the legal atmosphere for charters on four major categories: Charter Authorizers, Growth, Operations, and Equity. Those break down into 10 subcategories, such as Multiple Authorizers and Teacher Freedom.

Going by the subcategories, California scored best on No Charter Caps, meaning limits on the number of charters, 9 of 10 points. Although there have been attempts to limit California charter numbers, they still have grown impressively. As EdSource reported April 25, “Charter school enrollment in California declined this year for the first time after three decades of steady, and in some years, staggering growth.”

Problems included recovering from COVID, teacher shortages, difficulties in getting charters’ proper share of education budgets and continued hostility from the powerful teachers’ unions. But 30 years of growth to more than 1,300 still is impressive, and we’ll have to wait a couple years to see if this setback is just temporary.

The Golden State also scored well, 5 of 8, on School Autonomy. That means freeing charters from the stultifying control of state regulations and bureaucrats. There’s no point in sending your kid to a charter if it’s just like a regular school. You want innovation and attention to student needs, of course within proper legal parameters.

And the state rang the bell for 7 of 10 on Operating Funds, meaning getting fair treatment from the funds actually paid by the parents and other taxpayers. Charters often must battle to get their fair share.

On the negative side, California scored just 1 of 5 on Faculty Funds/Financing. Basically, the charters have a hard time tapping into the sources of teacher education available to the rest of the system.

Authorizer Independence of Local/State Authority got a grade of 2 of 7. A way to improve this would be to allow private companies to set up their own charters for employees’ kids. Wouldn’t it be great to drop off your child at a charter right next to your work, and run by your company? That also would be a workplace benefit to attract workers to California, which in other areas has become a difficult place to raise a family.

Freedom to Innovate was 2 of 7. The point of charters is to promote flexibility to meet student talents and needs. California needs to work on that one.

The total: California scored 32 of 65 possible points. The best state was Arizona, now the leader in charter innovation, at 53 of 65. According to the center, “Arizona made a comeback to overtake Florida as the first place winner in the advancement of charter schools. The Grand Canyon State increased funding and the proportion of students in charter schools, which have been innovatively creating new models of education – like microschools – which appeal to a broad array of parents.”

Despite some problems, charters continue to advance in California. I’ve visited many of them over the years. The most impressive are those in inner-city Los Angeles, which challenge their students to excellence and provide a strong academic environment. This encourages parental involvement, also vital to the schools’ success.

Charters are here to stay in California. It’s time for the state to treat them better and move back into leadership among the states.