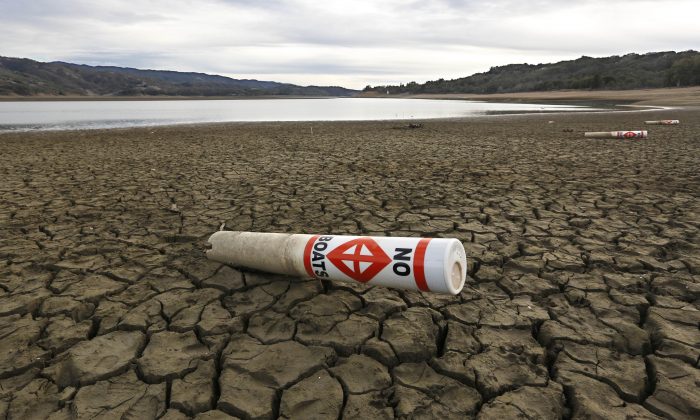 FILE- In this Feb. 4, 2014 file photo, a warning buoy sits on the dry, cracked bed of Lake Mendocino near Ukiah, Calif. New laws to deal with California's historic drought are among the more than 900 bills passed by the Legislature and signed by California Gov. Jerry Brown in 2014, that will take effect Jan. 1, 2015. (AP Photo/Rich Pedroncelli, File)
US

The U.S. Interior Department’s Bureau of Reclamation (BOR) announced Friday that it will not be delivering water to many of its Central Valley Project agricultural water contractors, continuing the governor’s state of emergency issued in January 2014.

Gov. Edmund G. Brown Jr. had issued the state of emergency due to alarmingly low water levels and called it the “driest year in recorded state history.”

Citing extreme drought conditions, the announcement states that absent some unusually heavy precipitation in the next few months, the drought is likely to persist.

Just When California Had Enough, Drought Predicted to Worsen

Although this is the second year for the state of emergency, the BOR said this is potentially the fourth year of severe drought.

“Reclamation and the Department of the Interior will continue to work with the State of California and our water users to do everything possible to increase water deliveries from the project as we move yet another difficult year,” said Reclamation Mid-Pacific Regional Director David Murillo.