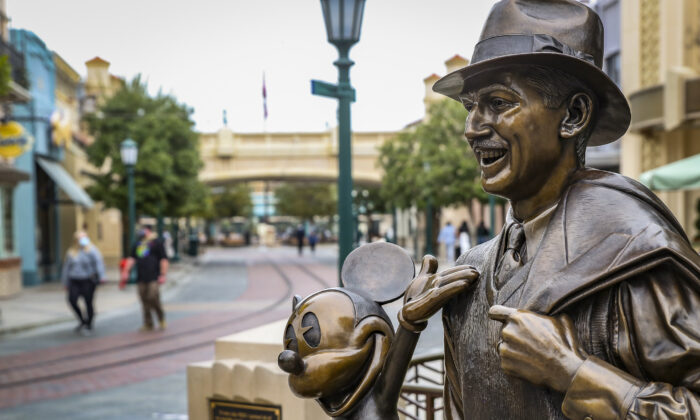 ANAHEIM, Calif.—Longtime Disney fans spoke out about the company’s denouncement of the State of Florida’s passage of the Parental Rights in Education bill—banning sexual orientation and gender identity in K–3rd grade classrooms—which escalated April 22 when Gov. Ron Desantis signed it into law to abolish special districts in the state, including the Walt Disney Company’s, which has afforded it self-governance since 1968.

Many, including Disney, claimed the bill—which is now law—was discriminative against the LGBTQ community, despite the text not including the word “gay” or prohibiting schools from saying the words.

One man, who said he was a Disney pass holder and asked to remain anonymous, told The Epoch Times it was a “bad move” for Disney to take a political stance.

“Their company is rooted in kids and they should keep it that way,” he said. “Disney was once one of the best companies and now they are biting at the hands that fed them and I will no longer invest in the company as much as before.”

But Kat Frazier, a lifelong Disney fan, however, said she disagreed with Florida’s decision to strip the company of its special district status, which allowed the company to oversee its own zoning and such things as fire protection, emergency medical services, and electricity needs.

“I think a good chunk of this is [a] scare tactic to get Disney to fall in line into supporting the bill,” Frazier told The Epoch Times. “It’s a very opportunistic move for the Florida government to essentially control this corporation that has started to build its own sovereignty.”

The company having the ability to develop and expand “whenever they want with little to no say from the Florida government can be beneficial,” she said. “Fans get rides and attractions at a much faster pace than they would in its California counterpart.”

Frazier said she believes the issue of Disney’s stance on the new bill, which opposers nicknamed “Don’t Say Gay,” and its self-governance did not have to coincide and should have been handled differently.

“These things need to be two separate discussions that have somehow become tangled in Florida politics when it’s very much unnecessary, ” Frazier said. “Disney as a company is allowed to voice [its] opinion on the “Don’t Say Gay” bill and I don’t think it should have any retaliation brought onto it because of this opinion.”