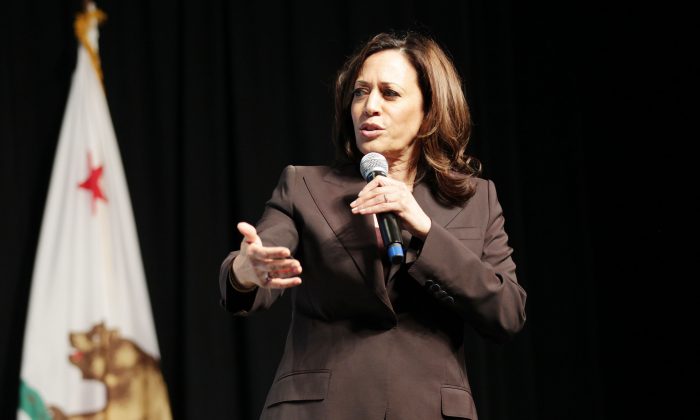 California Democratic Party Prepares for 2020 Ahead of Next Debate

As the Democratic Party gears up for its next debate on June 30 and 31 in Detroit, the presidential candidates have been preparing and adjusting their messages in recent weeks in order to try to win over the state’s voters.

As the former state attorney general, Sen. Kamala D. Harris (D-Calif.) once opposed the legalization of marijuana for recreational purposes. On July 23, she and Rep. Jerrold Nadler (D-N.Y.) introduced the Marijuana Opportunity Reinvestment and Expungement Act, which would decriminalize marijuana at the federal level.

“Times have changed,” she said in a statement. “We need to start regulating marijuana, and expunge marijuana convictions from the records of millions of Americans so they can get on with their lives.”

In the California Democratic Party’s early June convention, Harris joined a number of 2020 Democratic presidential contenders, who flocked to speak to delegates ahead of next year’s presidential primary.

The party convention nominated a new state chair, the president of the Los Angeles County Federation of Labor, Rusty Hicks. He had the backing of six of the eight statewide officeholders, all of which are Democrats, as well as most of the major unions and numerous members of the state legislature and Congressional Representatives.

“Everyone, including me, thought that with seven candidates running for party chair that the race would result in a runoff,” Hicks said in a public statement after his win. “I believe that the positive nature of our respective campaigns has been and will prove to be a positive step to a bigger, better, stronger Democratic Party. Let’s get to work.”

Hicks, who won 57% of the delegates’ votes, has stepped in to take the reins of the party after former chairman Eric Bauman resigned last November after facing numerous complaints of sexual harassment. A contentious race to replace the disgraced former party chair took place with a number of candidates vying for the top job. This included progressive activist Kimberly Ellis, who narrowly lost to Bauman in the 2017 race.

The party’s most recent platform from 2018, states:

“We support: excellence in education from pre-school through college; universal, affordable health care; gun violence prevention; protecting California’s natural resources, air, and water through the use of renewable sources of energy; and continually developing innovative measures to counter global warming and pollution.

“We draw strength from our diversity, and we believe that peace, justice, and security for all requires strong civil justice protections and an open and transparent government.

“This Platform resolutely defends these values that support all people’s hopes and dreams for a vibrant future.”

The platform is set to be updated again in 2020, likely to reflect a sharp contrast to the national Republican Party’s platform during a presidential election year.

The convention also saw a large number of 2020 Democratic presidential candidates receiving praise, while others were booed.

Former Vice President Joe Biden did not attend the convention, deciding to focus on white, working class areas of the country that supported Trump in 2016.

Harris took the opportunity to attack President Trump, while Senators Bernie Sanders of Vermont, Mayor Pete Buttigieg of Indiana, and Elizabeth Warren of Massachusetts advocated for a more progressive approach for the Democratic Party in 2020, taking subtle swipes at Biden’s comparatively moderate stance.

Meanwhile, former Governor of Colorado John Hickenlooper was booed for saying that “Socialism is not the answer” to America’s problems. He further went on to declare that the “Green New Deal” and “Medicare for All” plans were not viable.

Former Maryland Congressman John Delaney was also booed for nearly a minute for saying, “Medicare for all may sound good but it’s actually not good policy nor is it good politics.”

The absent Biden, who represents the more moderate wing of the party, has not taken a stance on these issues and is instead playing it safe, but he stands in contrast to other aggressively left-leaning candidates such as Warren, Sanders, Harris, and Buttigieg.

Matt Fleming, communications director for the California Republican Party, spoke to The Epoch Times on the direction the opposing party is taking.

Fleming harbors no ill will toward the California Democratic Party’s new leader, Rusty Hicks, but he cautioned against continuing the policies that he and the Republican Party believes are harmful for Californians.

“I wish him well. However, it’s been clear that the Democratic leadership has not focused on the true issues facing Californians – skyrocketing cost of living, homelessness, water and infrastructure – so I think his selection means more of the same.”

Fleming was asked about the recent passage of the budget by California’s Democratic supermajority in the state legislature, which would allocate $98 million in MediCal funding for illegal aliens aged 19-25.

“California is facing unprecedented demand on our resources.  Counties are already unable to keep with the high demand to provide service to MediCal recipients. Placing more demands on a system already in jeopardy of collapsing is not the answer.”

With the California primaries now being held in March, as opposed to June, the state has now become a battleground for the Democratic 2020 presidential primaries. The party will now have to see whether new state party chair Rusty Hicks decides to take a more moderate approach or embrace a more firebrand agenda.