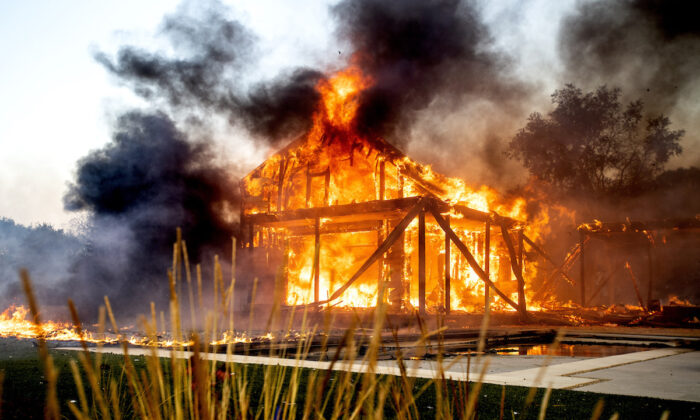 California Declares State of Emergency Over Wildfires, Hundreds of Thousands Forced to Evacuate

SANTA ROSA, California—California’s governor declared a statewide emergency with nearly 200,000 people ordered to flee their homes because of wildfires fueled by historic winds, while millions were without electricity after the largest utility cut power in some areas as a precaution to prevent other fires.

Gov. Gavin Newsom said in a statement that officials are deploying “every resource available” to respond to the wildfires, including a large blaze in Northern California’s wine country driven by powerful winds.

Smoke from a second wildfire in the San Francisco Bay Area briefly halted traffic on a bridge. The flames came dangerously close to homes in Vallejo. In the south, a wildfire in the Santa Clarita area near Los Angeles has destroyed 18 structures, threatened homes and critical infrastructure.

The biggest evacuation was in Sonoma County where 180,000 people were told to pack up and leave.

The fear that the winds could blow embers and spread fire across a major highway prompted authorities to expand evacuation orders that covered parts of Santa Rosa, a city of 175,000 that was devastated by a wildfire two years ago. The latest evacuation orders came after Pacific Gas & Electric shut off power to 2.3 million people across 36 counties starting Saturday evening.

“This is the largest evacuation that any of us … can remember,” the Sonoma County Sheriff’s Office tweeted Sunday morning. “Take care of each other.”

Hundreds of people arrived at the Sonoma County Fairgrounds in Santa Rosa throughout the night and into Sunday morning. Some came from senior care facilities. More than 300 people slept inside an auditorium filled with cots and wheeled beds. Scores of others stayed in a separate building with their pets.

Among them was Maribel Cruz, 19, who packed up her dog, four cats and fish as soon as she was told to flee from her trailer in the town of Windsor, which is about 60 miles north of San Francisco. She also grabbed a neighbor’s cat.

“I’m just nervous since I grew up in Windsor,” she said. “I’m hoping the wind cooperates.”

Sonoma County Sheriff Mark Essick pleaded with residents in the evacuation zone that stretched from the wine country to Bodega Bay on the coast to get out immediately, citing the 24 lives lost when fire swept through the region in October 2017.

“Although I’ve heard people express concerns that we are evacuating too many people, I think those concerns are not valid at this point,” Essick said at a news conference Sunday, noting that the winds pushed fire toward the towns of Healdsburg and Windsor overnight.

Dani Foster, of Santa Rosa, went to the fairgrounds after moving only about a mile every hour in a traffic jam on the freeway headed out of town.

“To think of (the fire) coming over Healdsburg and Windsor and into Santa Rosa, that’s a little overwhelming and scary,” she said. “You don’t want it to be that big.”

The Healdsburg area lost one of its historic attractions to the flames Sunday when embers carried by the winds sparked a blaze that engulfed the Soda Rock Winery whose buildings included a general store and post office founded in 1869. The winery was about 10 miles outside the town of Healdsburg.

The Kincade Fire began Wednesday night and is only 10% contained, the California Department of Forestry and Fire Protection said Sunday. It has burned 47 square miles and has destroyed 79 structures.

Fire officials said about 30,000 firefighters took an aggressive stance overnight to keep the fire from spreading.

The fire was expected to be especially unwieldly Sunday due to powerful winds gusting at up to 80 mph on hillsides. The wind event was expected to last until Monday, the National Weather Service said.

Fire officials said the winds could potentially spark spot fires up to a mile away. They feared that if it crosses U.S. 101, the fire could spread westward to an area that hasn’t had a fire in 80 years.

“The fuel in that area is extremely dense, they’re extremely old and dry,” said Steve Volmer, a fire behavior analyst with CalFire.

Meanwhile, another blaze erupted Sunday on both sides of a San Francisco Bay Area freeway and quickly spread, coming dangerously close to homes in Vallejo, which is 55 miles south of Geyserville where the massive Kincade Fire is burning.

A live broadcast on KGO-TV showed the fire on both sides of Interstate 80 near Vallejo and homeowners using hoses on a hillside to try and fight it. Smoke from the wildfire forced a freeway to close and the evacuation of California State University Maritime Academy.

To the south, a wildfire dubbed the Tick Fire destroyed 18 structures Thursday in the Santa Clarita area north of Los Angeles. Nearly all the 50,000 residents ordered to evacuate were allowed back home after Santa Ana winds began to ease.

“I’m thankful that nothing happened to my house, but I feel bad for my neighbors,” Briano, 71, said Saturday.

As of Sunday, the Tick Fire was 65% contained.

What sparked the current fires is unknown, but PG&E said a 230,000-volt transmission line near Geyserville malfunctioned minutes before that blaze erupted Wednesday night.

The possible link between the wine country fire and a PG&E transmission line contained grim parallels to last year when most of the town of Paradise burned, killing 85 people in the deadliest U.S. blaze in a century.

PG&E said this weekend’s shut-off was affecting about 940,000 homes and businesses. The city of San Francisco was not in line for a blackout amid shut-offs for most of the rest of the San Francisco Bay Area, the wine country to the north and the Sierra foothills.

Many residents facing blackouts had barely recovered from a previous shut-off that cost some businesses tens of thousands of dollars in losses.

By Terence Chea and Daisy Nguyen