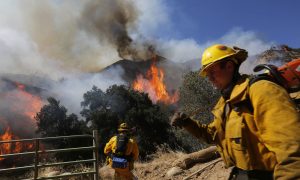 The fire, which has burned for a week, has charred more than 11 square miles in Solano County. It jumped the containment line Tuesday in rugged, steep terrain baked by triple-digit temperatures.

“We’re optimistic that we are able to stop and hold it,” said Daniel Berlant, a spokesman for the California Department of Fire and Forestry Protection.

At least 136 structures remain threatened, and more than 200 people were still under orders to evacuate their homes on Wednesday.

Temperatures were expected to remain high until Friday, when storms moving into Northern California could bring cooler weather but also a threat of lightning, Berlant said.

Meanwhile, a fast-spreading fire that broke out Wednesday afternoon east of Lower Lake prompted the immediate evacuation of about 50 residences and vacation homes.

The blaze grew from grew from 150 acres to more than 1 1/2 square miles within six hours. It traveled at a rapid rate because the hard-to-access terrain is heavy with brush and timber in Lake County, Cal Fire said.

Meanwhile in the Sierra Nevada foothills, evacuation orders have been lifted for residents of 50 homes after a fire started there Saturday, Berlant said.

The fire northeast of Sacramento burned through more than 3 1/2 square miles and is about half contained.

Residents in the Central California community of Cascadel Woods north of Fresno were being warned to prepare to evacuate because of another blaze that has charred more than 3 square miles. It is 30 percent contained.

Authorities say a boy acknowledged starting the Cascadel Woods fire by playing with a lighter to burn pine needles in the dry Sierra Nevada. The boy faces criminal charges but remains out of custody because he and his family are cooperating, officials say.

In Shasta County in the far northern part of the state, firefighters were battling two fires that have prompted some evacuations and several road closures.

And in Butte County, the growing Swedes Fire was burning over a square mile near Bangor but was threatening 50 buildings and was just 10 percent contained early Thursday, according to Cal Fire.