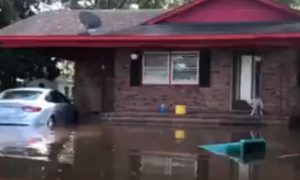 Members of the Special Enforcement Bureau tactical squad and sheriff’s deputies rescued two California campers and their dogs, trapped by snow for two weeks in the mountains near Los Angeles.

According to Fox11, the couple and their dogs were on a camping trip on the north side of Alamo Mountain near Frazier Mountain Park, about 75 miles north of Los Angeles, when they became stranded when their truck got stuck in snow. The couple was not named in the report.

But after two weeks, the campers ran out of supplies.

“They had fuel for the stove to melt the water, but then they ran out of fuel,” Miranda told FOX11. “They were thirsty because they weren’t able to get water out of the snow.”

Miranda said the couple hiked for several miles to find a location where they had cell phone coverage, and called 911.

“We were able to locate their latitude and longitude,” he said.

A helicopter flew in SEB members and sheriff’s deputies, with the SEB posting several photos of the rescue on their Twitter feed.

“We work and train as a team together and it makes rescues like this rather routine,” pilot Jim Wolfhope told FOX11.

The crew brought the couple and dogs to safety. While uninjured, the couple was reportedly tired, hungry, and dehydrated.

What Is the Special Enforcement Bureau?

The Los Angeles Sheriff’s Office calls the SEB unit “one of the preeminent tactical teams in the United States,” with a range of specialized operations ranging from homeland security and active shooter response, to tactical medics and air rescues (pdf).

SEB responds to about 200-300 tactical operations each year, including hostage situations and defusing bombs.

The Emergency Services Detail is one of the SEB’s five permanent units, with tactical paramedics and rescue recovery specialists.

“The primary goal of SEB is to save lives,” says LASO, adding that the unit’s members undertake intensive training to be able to operate “under extremely stressful and hostile conditions.”

The 5 C’s of Survival

Canterbury writes on his blog that “there are certain items that are a must for any survival or self-reliance scenario and these items should be considered first for any Pack, B.O.B. (Bug Out Bag) or Car/Truck type emergency kit.”

He calls these must-have items the “5 C’s of Survivability:”

“With these 5 items, you can effectively accomplish all your basic survival needs for a short period adding in your self-reliance,” Canterbury notes.

Canterbury, who co-starred on the Discovery Channel’s reality television show Dual Survivor and the National Geographic’s survival series Dirty Rotten Survival, explains in a video how the five critical items can be used to maximize one’s chances of surviving in the wild.

Canterbury says that while it’s possible to reconstruct the five critical items using natural materials found in the wild, this takes both specialized knowledge, time, and energy.

“Understanding these five items and the comprehensive uses for them is the first step to understanding what it really takes to reduce the size and weight of your kit and effectively maintain true survivability,” he says.

“What is even more important to understand is the skill and ability to replace these items using natural material if and when needed as that is the true measure of your own skills.”