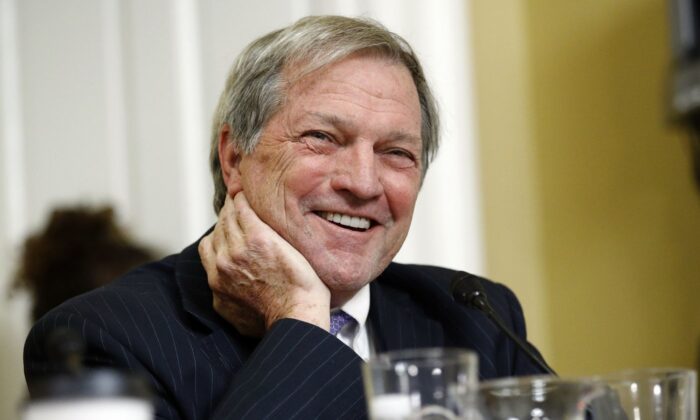 Representative Mark DeSaulnier (D-Calif.) smiles as he speaks during a House Rules Committee hearing on the impeachment against President Donald Trump on Dec. 17, 2019 (Patrick Semansky/POOL/AFP via Getty Images)
US News

Rep. Mark DeSaulnier (D-Calif.) is in critical condition after falling during a run, his office said in a statement on Sunday.

DeSaulnier, 67, “suffered a traumatic rib fracture” while he was jogging before he was hospitalized on March 13, his chief of staff, Betsy Arnold Marr, said on Saturday.

He then developed pneumonia due to his injuries and is now in critical condition. DeSaulnier did not test positive for the CCP virus when he was given a test, according to Marr.

“The doctors are doing everything they can to care for the Congressman,” Marr said. “Mark’s family and staff appreciate your thoughts and prayers during this very difficult time.”

“Unfortunately, Congressman DeSaulnier’s condition has deteriorated and he is in critical condition,” her statement also said. “The doctors are doing everything they can to care for the Congressman.”

The congressman was elected in 2014 to California’s 11th congressional district.

The state of California had the third-highest number of CCP virus cases in the United States behind New York and Washington state.

Three members of Congress so far have contracted the virus, including Sen. Rand Paul (R-Ky.), whose office said Sunday that he appears to be asymptomatic. Reps. Mario Diaz-Balart (R-Fla.) and Ben McAdams (D-Utah) have also tested positive.

Paul will still “work for the people of Kentucky at this difficult time,” according to a Twitter post on his account. “Ten days ago, our D.C. office began operating remotely, hence virtually no staff has had contact with Senator Rand Paul.”

The 57-year-old junior Kentucky senator is “feeling fine and is in quarantine. He is asymptomatic and was tested out of an abundance of caution due to his extensive travel and events. He was not aware of any direct contact with any infected person,” it added.

A staffer working for Vice President Mike Pence was confirmed to have contracted it. Pence and his wife were tested for the virus, and the results came back negative on Saturday. “Neither President Trump nor Vice President Pence had close contact with the individual,” Pence spokeswoman Katie Miller said in a statement. “Further contact tracing is being conducted in accordance with CDC guidelines.”

More than a dozen lawmakers have entered voluntary self-quarantine amid the pandemic, and it’s likely that more will be infected.