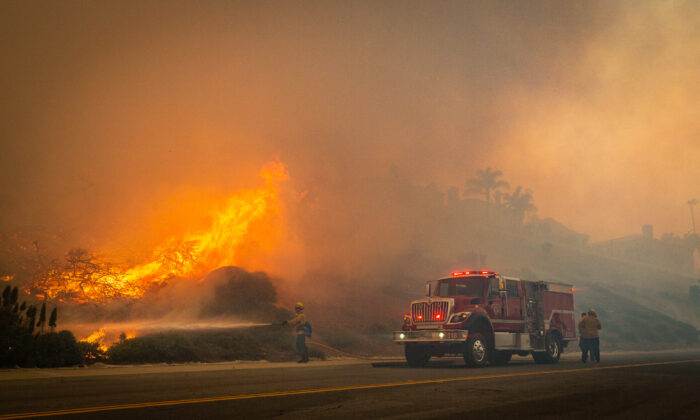 A bushfire in California has ravaged the coastal regions of Orange County, burning through several homes and forcing hundreds of citizens to evacuate to safer areas.

The fire began on Wednesday afternoon at around 2:45 p.m. at the Aliso and Wood Canyons Wilderness Park and quickly spread over 200 acres of land. It then spread to Laguna Niguel in Los Angeles, one of the richest neighborhoods in the state, and ripped through mansions. As of Thursday, 20 homes have been destroyed, with 11 more damaged. Around 900 homes are under evacuation orders.

“When we reached the top, we saw the full scale of how big the fire was and witnessed how quickly it was spreading,” Laguna Niguel resident Allan Aguilera said to CNN. “There were tons of people in the area doing the same, watching the fire before the winds changed and began pushing the flames closer and closer. At that point, we decided to leave and go prepare for potential evacuation.”

“The situation was incredibly tense, but we kept our cool, gathered our most valuable belongings … and made an early evacuation to avoid any potential bottle-necking if the worst case scenario were to play out.”

The coastal fire has come much earlier than the state’s usual fire season, which begins around late summer and fall. Only 15 percent of the fire has been contained.

With temperatures in the days ahead expected to be up to 15 degrees higher than average, there are concerns that the fire will spread to more places. Scientists and officials have been caught by surprise at the intensity and speed with which the fire has spread.

According to Orange County Fire Chief Brian Fennessy, bush fires typically used to be something minor, but not anymore. The fuel beds in the county, throughout the West and Southern California, are “so dry” that fires like this are going to be “more commonplace,” he told CNN.

“We’re seeing spread in ways that we haven’t before,” Fennessy stated. “Five years ago, 10 years ago, a fire like that might have grown to an acre, couple acres” before it was under control. But now, the “fire is spreading in this very dry vegetation and taking off.”

Around 550 firefighters were deployed to contain the fire, of whom two were injured. Both of them were admitted to the hospital for treatment and were eventually released.

Over 2,000 square miles of land have been burned so far in 2022 nationwide according to the National Interagency Fire Center—the most at this point in the year since 2018.

As for the cause of the fire, South California Edison (SCE), the primary electricity supply company for much of Southern California, said in a letter to the California Public Utilities Commission (CPUC) that “circuit activity” could be responsible.

“The cause of the fire is under investigation and has reportedly consumed over 150 acres and has destroyed multiple residential structures,” the company said in the letter. “Our information reflects circuit activity occurring close in time to the reported time of the fire. Our investigation is ongoing.”