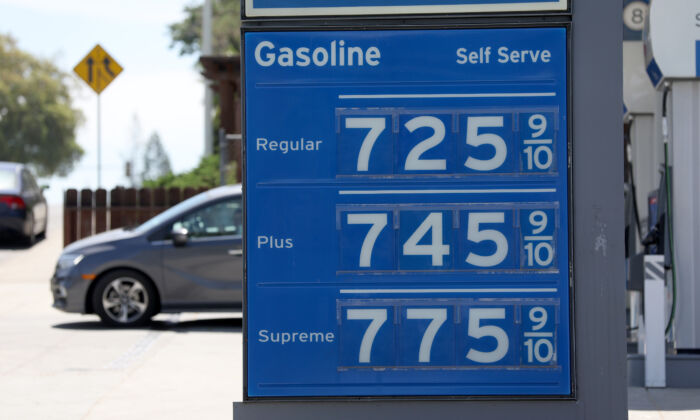 Gas prices over $7.00 a gallon are displayed at a Chevron gas station in Menlo Park, Calif., on May 25, 2022. (Justin Sullivan/Getty Images)
Economy

An increasing number of California cities are banning the construction of new gas stations despite critics saying that stations are necessary for the vast majority of drivers and commuters.

“We didn’t know what we were doing, actually,” Petaluma Councilwoman D’Lynda Fischer told the Los Angeles Times Monday of a citywide ban on new stations. “We didn’t know we were the first in the world when we banned gas stations.”

Since that ban, four other cities in the Bay Area have done the same.  They include Rohnert Park, Sebastopol, American Canyon, and Calistoga.

And some elected officials in Los Angeles County are pushing to bar the construction of gas stations in the county, which has 13 million residents.

“We are ending oil drilling in Los Angeles. We are moving to all-electric new construction. And we are building toward fossil fuel free transportation. Our great and influential city, which grew up around the automobile, is the perfect place to figure out how to move off the gas-powered car,” Councilman Paul Koretz, a Democrat, told the LA Times.

Koretz, in the interview, claimed that a ban would be a step toward Gov. Gavin Newsom’s proposal to end the sale of gas-powered vehicles in California by 2035.

“Given Gov. Newsom’s timeline to end the sale of gas vehicles by 2035, gas stations are a dying business,” Koretz said.

But Kevin Slagle, a spokesperson for Western States Petroleum Association, told the paper that the ban will likely have “unintended consequences.” Bans on gas stations will only make it more difficult for motorists who use gas-powered vehicles.

“Taking what we’re facing today—a lot of demand and not a lot of supply—if you start taking stations out, new and existing, if you make a commodity tougher to find, that often means higher costs,” he said.

The average price per gallon in California stands at $6.058 as of Tuesday, according to data from automotive club AAA. Mono County, which is located in the eastern Sierra Nevada mountains, has $7.11-per-gallon prices on average, the data show.

A recent survey from Consumer Reports, which said it asked around 8,000 Americans, found that 61 percent said they wouldn’t seek to own an electric vehicle because of charging logistics while 55 percent cited the number of miles a vehicle can go per charge.

Another 52 percent said that the costs of buying and maintaining an electric vehicle are cost-prohibitive. Another 46 percent of the respondents stated they have not heard of any financial incentives available for owners of electric vehicles.