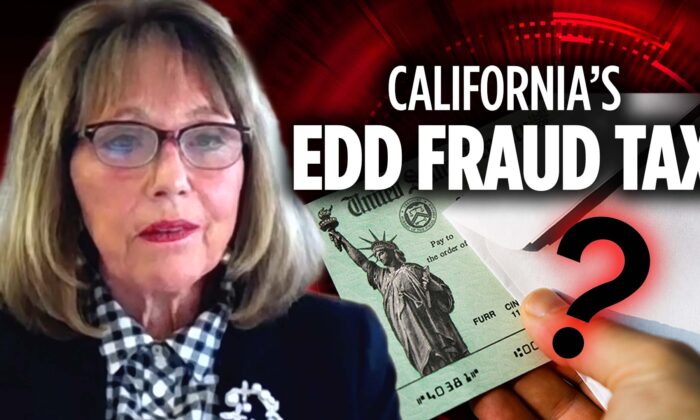 As California faces a $20 billion unemployment fraud deficit, businesses may be required to pay back the funds, according to Sen. Patricia Bates (R-Huntington Beach).

Bates said employers will be responsible for paying back the money lost from fraudulent unemployment benefit claims in 2022, as required by federal law.

“That’s going to be a burden on them,” Bates said on Epoch TV’s “California Insider.”

The Federal Unemployment Tax Act, a tax on employers that funds unemployment compensation, requires businesses to make up for a deficit if the funds run dry, according to Bates.

Bates said the recent unemployment fraud deficit may cost employers in California an added $21 per employee, at minimum.

The widespread fraud started throughout the state when the Pandemic Emergency Unemployment Compensation was offered through the Employment Development Department (EDD) beginning in March 2020.

When the unemployment system became overwhelmed during the pandemic, the EDD began to accept all applications without verifying identity employment status, including those incarcerated, Bates said.

Bates gave the example of the EDD sending out $21,000 in unemployment funds to an applicant who applied with state Sen. Dianne Feinstein’s name.

While only $20 billion in fraud has officially been exposed, Bates warns the number could be up to $30 billion.

“The concern is, there is $10 billion more that’s been paid out to people who shouldn’t have been eligible,” Bates said. “Now they’re checking that eligibility retroactively.”

Interviews to ensure unemployment benefits are eligible are four to six months behind, Bates said.

“Where will those people be in six months?” Bates said. “Will they still be in California? Will we be able to track them? Of course, they spent the money thinking that they were eligible. Is that their fault?”

While the EDD begins to verify the identities and eligibility status of those who received unemployment funds, a miscommunication or breakdown of the internet and technology (IT) systems between Bank of America and EDD has occurred, Bates said.

The EDD and Bank of America work in partnership to deliver debit cards with unemployment funds on them. While most hope for accuracy within the system, letters have been sent to the wrong addresses and recipients in Bates’s Southern California district.

Three letters were received in Bates’s office at the end of November regarding individuals who have received letters addressed to other recipients about how to use their debit card or requesting more information.

Despite the mishap, the issues within the state’s unemployment system date back many years.

In 2011, an assembly member proposed to require that Social Security numbers appear on all EDD communications, according to Bates. The bill made it to the governor’s desk but was vetoed because it would interrupt the system and cost millions to improve the IT systems.

As employers will take on the burden of paying back the funds, small businesses continuing to recover from the COVID-19 pandemic shutdowns will be impacted, Bates said.

To minimize the impact, the Senate Republican Caucus proposed the state’s Budget Committee take from California’s surplus to assist with paying down the debt to relieve the burden on employers, according to Bates.

As some states that have accumulated unemployment fraud have paid back the debt to avoid the fees falling onto employers, Bates recommends California does that same.

“They are paying the debt, so their employers don’t have to,” she said. “That’s what California must do to make it fair.”

With the fraud still accumulating, Bates called on state legislators to take accountability and be more proactive in pushing for a change in the system.

“I do think the responsibility is with our legislators, and I think they need to be more involved,” she said. “It has been a bipartisan debacle.”

As fraud persists, Bates reassured a fraud unit has been formed and is ordered to be fully staffed to have rectified the EDD fraud by Nov. 30. The review and report by the fraud unit will be uncovered in the next month.