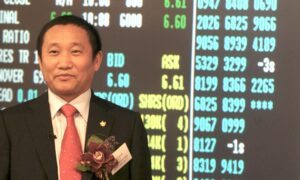 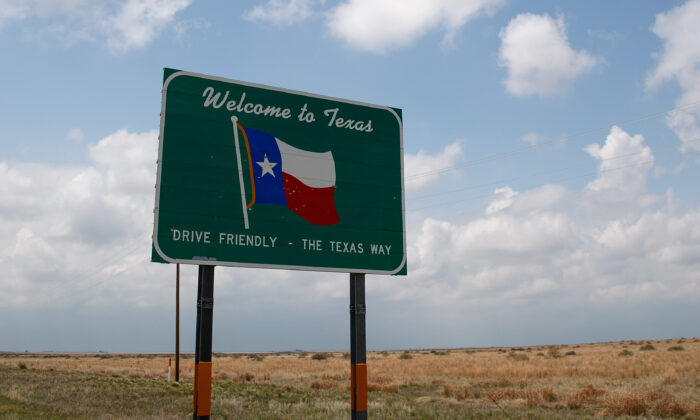 A 'Welcome to Texas' sign stands on the side of the road near Dalhart, Texas, on May 9, 2017. (Drew Angerer/Getty Images)
Southern California

California Businesses Exiting Faster Than Ever

California, there they go.

Business headquarters are leaving the state at an accelerating rate. That’s according to a new report (pdf) for the Hoover Institution by Lee E. Ohanian and Joseph Vranich, titled “Why Company Headquarters Are Leaving California in Unprecedented Numbers.”

Ohanian is a Hoover research fellow and professor of economics at UCLA, and Vranich has been one of my sources for 20 years. His Spectrum Location Solutions used to be in Irvine, California. Now, it’s in McKinney, Texas, near Dallas.

Just like so many former California-based firms and residents.

The report’s shocking news: For the first six months of 2021, the exodus of company headquarters from California has doubled from the same period in 2018. And in the first half of this year, 74 skedaddled, more than all last year.

The reasons: “High tax rates, punitive regulations, high labor costs, high utility and energy costs, and declining quality of life for many Californians which reflects the cost of living and housing affordability.”

However, the authors caution the 2020 numbers were affected by COVID-19, which slowed planning and scouting for new locations.

The study notes of this and other data: “Additional companies have relocated their headquarters to other states, but the only states listed above are those where such events are public knowledge. The states listed have likely experienced more wins.”

Anecdotal evidence also supports the data. I know many people who have left, mainly for Texas and Tennessee. Almost everybody I know talks about getting out, although departing the balmy weather, family, friends, and local connections can be difficult.

I asked Vranich if there’s any awareness of this exodus among Gov. Gavin Newsom and the state’s other top political leaders. “No,” he replied. He said the state isn’t even thinking about cutting taxes, despite what Newsom claims is a $78 billion budget surplus (but which the Legislative Analyst pegged at a still hefty $38 billion).

And he pointed to this July 2021 statement by Ohio Lt. Gov. John Husted: “Fifteen years ago, we began reforming our tax plan—we eliminated the corporate franchise tax … eliminated the death tax—we went from a high-tax state to a lower-tax state. We absolutely do see it as a time to compete. Capital will ultimately go where it can be the most appreciated.”

And: “Gov. Newsom’s strategy is not to reduce taxes but to increase incentives offered to companies, thus increasing taxpayer burdens…. Since the start of the Newsom Administration in January 2019, GO-Biz awarded 147 businesses a total of $593,844,974 in California Competes Tax Credits.”

I asked Vranich if there were any good signs.

He said, “An honest politician would admit that the only bright spots include growing tax revenue from Silicon Valley’s billionaires and also from film-making that is being preserved thanks to the state’s generous economic incentives.”

The study cited Chief Executive magazine’s ranking of state business climates, which pegged California as the worst of the 50 states and Texas the best—in each case, for the 17th year in a row.

On the Tax Foundation’s 2021 State Business Tax Climate Index, California did marginally better—49th place, after New Jersey. Their analysis: “California’s poor position is unlikely to improve considering that its businesses routinely face threats of increases in income taxes, property taxes, and sales taxes along with higher county and municipal taxes and fees.”

The key to what’s left of California’s once tolerable tax climate is Proposition 13, the property tax limitation approved by voters in 1978.

Vranich and Ohanian warn: “Pro-tax coalitions launch continual efforts to eliminate or weaken Proposition 13’s protections—coalitions comprised of legislators, deep-pocketed special interests, and interests such as government contractors and state and local government-employee unions. Such entities have spent millions of dollars to overturn Proposition 13. Thus far they have not been successful, but they certainly will try again.”

However, San Francisco’s population is 873,965 (2020 U.S. Census) compared to Los Angeles’s 3.9 million. That’s 4.5 times higher. So the per capita San Francisco HQ loss is about four times that of Los Angeles.

By contrast, Orange County’s population of 3.2 million (2020 U.S. Census) is just behind L.A.’s 3.9 million. But OC suffered only about half of L.A.’s headquarters losses.

OC’s business and tax climate is well known as more welcoming than Los Angeles. For example, the City of Los Angeles’s sales tax rate is 9.5 percent. By contrast, most OC cities’ rates are 7.75 percent.

The authors charge, “Lawmakers in Sacramento continually enact laws designed to expand civil liability on business and property owners … California’s statutes and regulations are so unreasonable that companies have reported in confidence that their legal costs in California are disproportionate to the number of employees they have in the state.”

California reformed workers compensation laws in 2003 under Gov. Arnold Schwarzenegger. It worked for a while. But a friend of mine in the industry said since then the reforms have been undercut by laws, court rulings, and new legal maneuvers devised by plaintiff attorneys.

It’s going to get worse for California: “Customers in all parts of California are likely to see energy cost increases by virtually every utility. PG&E Corp. submitted a proposal to regulators for a rate increase totaling $3.6 billion starting in 2023 to help make its system more reliable and safer by sparking fewer fires.

“Southern California Edison in April 2020 increased its rates by approximately 7 percent overall. In 2021, SCE requested an additional residential rate increase of 14 percent, while commercial rates are estimated to rise between 9 and 11 percent.”

The report identified large and medium firms whose relocation can be found in news accounts. But many small firms just up and leave with no notice.

In sum, it’s a dismal report. The state budget currently is buoyed by the bounty from Silicon Valley, whose revenues just keep growing and growing.

But for just about any other firm in California, the times are tough and getting tougher. And when the going gets too tough, even the tough get out.