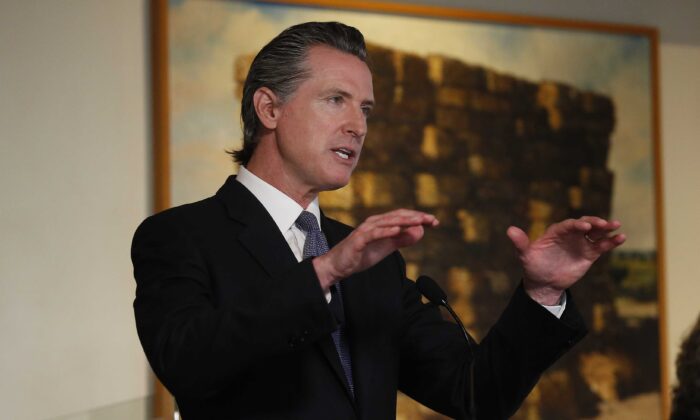 California Gov. Gavin Newsom speaks at a news conference at Mustards Grill in Napa, Calif., on May 18, 2020. (Rich Pedroncelli/AP Photo)
By Brad Jones

A revised $202.1 billion state budget that draws on state reserves and boosts taxes on businesses is expected to prevent mass layoffs in K-12 schools and community colleges in California.

The Assembly approved the budget June 26, after marathon Senate hearings that ended minutes before midnight the previous night. The budget and related trailer bills are now on Governor Gavin Newsom’s desk awaiting his signature by the July 1 deadline.

“We started 2020 at an economic high, and pivoted swiftly over the last few months to arrive at a budget plan that is responsible as well as responsive to the needs of Californians,” Atkins said in a statement.

“This pragmatic agreement is possible, thanks to the responsible budgeting decisions we made over the past decade that built reserves and paid down debts. This budget reflects compromise on all sides, but protects critical priorities, such as education and health and human services programs, while maintaining significant reserves,” she said.

Under the new deal, businesses will face $4.4 billion in tax increases, which Republicans say will heap more woes on the backs of an already struggling private sector. Even after federal relief efforts, many business owners have been hit hard by the pandemic.

The state will defer about $12.5 billion in reimbursement payments to school districts for public schools to help make up the deficit, and the budget is expected to prevent layoffs of teachers and employees and classified workers, including bus drivers, custodians, and nutrition workers.

State employees will face wage cuts. For example, those represented by Service Employees International Union (SEIU) Local 1000, will take two furlough days per month and delay for two years a pay raise they were supposed to get on July 1. Other unions also will be affected.

To cover the deficit, the state will draw heavily from the state’s $16 billion reserve fund, using almost $8 billion the first fiscal year beginning July 1 and another $5 billion over the following two years, draining the fund to $2.9 billion by the summer of 2023.

Senate Republican Leader Shannon Grove (R-Bakersfield) accused Democrats of using the COVID-19 state of emergency and the budget deadline as a means to mix policy into several budget trailer bills.

“This year’s state budget vote was negotiated as a backroom deal by only one party with very little transparency to the public. The Democrats’ budget increases taxes, makes cuts to law enforcement, funds the big rail fail, and allocates $21 million dollars to enforce the anti-worker law, Assembly Bill 5,” Grove said in a statement. “As more than 5 million unemployed Californians grapple with the government-sanctioned shutdown, businesses are struggling to reopen and get people back to work.”

Newsom’s original $222.2 billion budget proposal in January had projected a $5.6 billion surplus, and called for substantial increases in spending on education, health care, and social services. Those proposed spending increases were scrapped in the governor’s May 14 budget revisions, known as the May Revise.

He then warned of deep spending cuts and layoffs unless Congress passed a $3 trillion spending plan touted by House Speaker Nancy Pelosi (D-Calif.) and other Democrats. The Helping Emergency Responders Overcome Emergency Situations (HEROES) Act would include $1 trillion for state, local, and tribal governments nationwide.

The HEROES Act is a proposed addition to the $2.2 billion Coronavirus Aid, Relief, and Economic Security (CARES) Act signed into law by President Donald Trump on March 27. The HEROES Act would be the fourth relief bill related to the COVID-19 pandemic if it passes a Republican-dominated U.S. Senate.

The 2020–21 budget will maintain funding for K-12 schools and community colleges at current levels but could result in combined funding cuts of about $1 billion for the California State University and University of California systems. However, if the HEROES Act gains traction in the U.S. Senate and is passed, it could mean more spending for schools.

“Our economy has been pummeled by COVID-19, but thanks to a decade of pragmatic budgeting, we can avoid draconian cuts to education and critical programs, or broad middle-class tax increases,” Atkins said in a joint statement with the other three Democratic leaders.

“Californians are counting on us to make the right call at the right time. Working families who still have jobs but need the state’s safety net are relying on us to budget carefully so that our state, and all who live here, can rebound,” they said. “This plan builds off the spirit of Governor Newsom’s proposal, and will set our state on a path of economic recovery, while avoiding actions that would further harm Californians.”

Meanwhile, Republicans in both houses have said that while they understand the COVID crisis has deeply impacted the 2020–21 budget and the process, too many budget-related trailer bills were posted 72 hours in advance of the budget hearings, the minimum required under the law, which left little time for analysis, scrutiny, and debate.