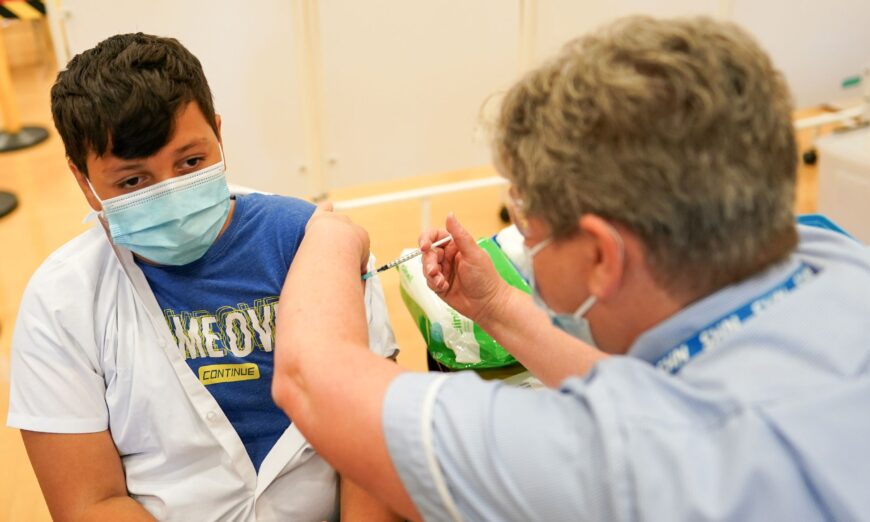 Felix Dima, 13, from Newcastle receives the Pfizer-BioNTech COVID-19 vaccine at the Excelsior Academy in Newcastle upon Tyne, England on Sept. 22, 2021. (Ian Forsyth/Getty Images)

California Democrat lawmakers introduced a bill that would allow children to be administered with COVID-19 vaccines without parental consent.

Senate Bill 866, also known as the Teens Choose Vaccines Act, has been introduced by state Senators Scott Wiener and Richard Pan, who intended to add a new section to the California Family Code.

“A minor 12 years of age or older may consent to a vaccine that is approved by the United States Food and Drug Administration and meets the recommendations of the Advisory Committee on Immunization Practices (ACIP) of the federal Centers for Disease Control and Prevention (ACIP) [sic] without the consent of the parent or guardian of the minor,” read the proposal.

The bill doesn’t mention COVID-19, the disease caused by the CCP (Chinese Communist Party) virus, but refers to human papillomavirus (HPV) and hepatitis B vaccines instead.

However, Wiener said COVID-19 vaccination for children is an apparent goal of the bill.

“With the persistence of the COVID-19 pandemic and the widespread availability of highly effective and safe vaccines to treat serious COVID-19 illness, it’s more important than ever that young adults be able to access vaccines,” he said in a statement.

Current California law requires parental consent for children ages 12 to 17 to be vaccinated unless the vaccine specifically targets a sexually transmitted disease.

Besides Wiener and Pan, the bill has eight coauthors, including seven assembly members and one senator.

It’s unclear how widely the bill was received in the state legislature, controlled by the Democratic Party in both the upper and lower house in The Golden State.

California Assembly Speaker Anthony Rendon refused to comment on the bill, saying the bill hasn’t yet reached the Assembly floor.

However, some prominent epidemiologists have reservations about vaccinating children.

Dr. Peter McCullough, a leading cardiologist and epidemiologist, said that healthy children should not be given the COVID-19 vaccine because the percentage of those children that die from the virus is minuscule, but the adverse effects from the vaccines in that age group are of great concern.

Dr. Robert Malone, a virologist and immunologist who has contributed significantly to the technology of mRNA vaccines, shares the same viewpoint.

“There’s a good chance that if your child takes the vaccine, they won’t be damaged, they won’t show clinical symptoms—[but] they may have subclinical damage,” Malone told EpochTV’s “American Thought Leaders” program in an interview. “But the question is, do you want to take that chance with your child? Because if you draw the short straw and your child was damaged, most of these things, if not all of them, are irreversible. There is no way to fix it.”

Allen Zhong
senior writer
Follow
Allen Zhong is a long-time writer and reporter for The Epoch Times. He joined the Epoch Media Group in 2012. His main focus is on U.S. politics. Send him your story ideas: allen.zhong@epochtimes.nyc
SHARE
Friends Read FreeCopyFacebookTweet
SHARE
Friends Read FreeCopyFacebookTweet
You May Also Like