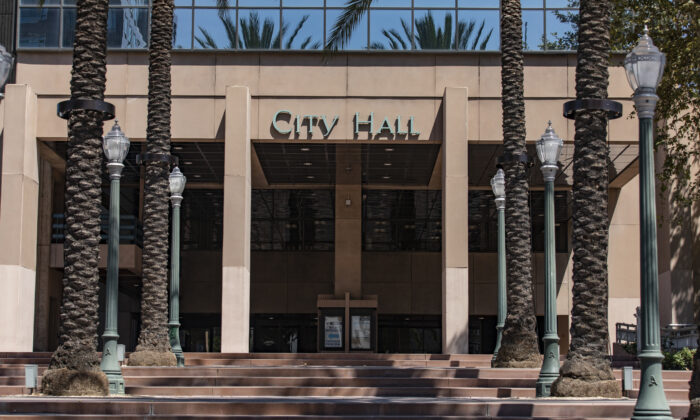 Mayor of Anaheim Harry Sidhu criticized a state economic report that claimed Anaheim is among the cities with the highest overall risk of financial distress in the state.

“Our city has emerged from the challenge of our time with economic recovery underway and a bright future ahead,” Sidhu wrote in an Aug. 26 statement. “You wouldn’t know it from a recent report on California cities that ranked Anaheim alongside El Cerrito and Calexico.”

Anaheim ranked eighth-worst city in the state in terms of fiscal health in fiscal year 2019–20, with the worst being Compton and the best being Calimesa.

According to the state auditor’s website, this ranking means that Anaheim “is at risk of financial hardship and must immediately evaluate and respond to its weak financial position to prevent the reduction of city services.”

“Residents may experience reductions in key services the city provides, such as fire, police, road maintenance, and parks.”

Anaheim’s long-term debt obligations (excluding retirement obligations) were over $2 billion for the last fiscal year, while the government-wide revenue was nearly $1.25 billion.

“[Anaheim] may have insufficient reserves to cover its expenses in the event of a fiscal emergency, such as an economic recession,” as the city’s general fund expenditures and transfers out was nearly $440 million in fiscal year 2019–20, according to the state’s website.

“Rather than increasing, this city’s general fund revenues have decreased, on average, by 1 percent over the last few years. This may constrain the city’s ability to respond to economic changes and pay rising costs of services,” according to the state’s website.

Sidhu called out the state auditor’s office report, saying they “got it wrong.”

“No one takes fiscal health more seriously than I do. I welcome discussion of Anaheim’s budget, pensions and debt. But I take issue with the report’s methodology and characterization of our city,” Sidhu wrote.

“Our economy is the envy of the cities called out by the auditor,” Sidhu wrote.

“Like nearly all cities, we have pensions and debt. That should not surprise anyone. As a fiscally conservative city, we take on obligations knowing we can meet them.”

Sidhu said that about 70 percent of the state’s pension obligations are now funded and are on track to be fully funded as new, more cost-effective plans come to fruition.

The city’s debt is in part due to the $510 million borrowed for the Anaheim Resort expansion.

“Part of the Anaheim Resort debt was retired in 2019 with the potential to pay off the balance by the end of this decade, years ahead of schedule,” freeing up about $100 million annually for the city’s general fund, Sidhu said.

“The pandemic hit Anaheim about as hard as any city. That is not mismanagement, just bad luck,” he wrote.

Anaheim borrowed $139 million to fill the remaining gaps in the budget, Sidhu wrote, adding that “we faced an impossible choice—borrow or cut the bone. The alternative? Delayed public safety response times, closed libraries and decimated services for the neediest in our community, including those living in homelessness.”

“We took on this new obligation knowing what the state auditor does not—Anaheim is attracting billions in investment that will create new revenue for our city for years to come.”

California State Auditor spokeswoman Margarita Fernández told The Epoch Times via email that the “rankings were based on the risk indicators that were calculated using the information from their most recent audited financial reports (from fiscal year 2019-20).”

The audited financial reports for fiscal year 2020–21 are not yet available; however, the state studied how cities are faring during the pandemic considering that federal funds have been increasing city revenue.