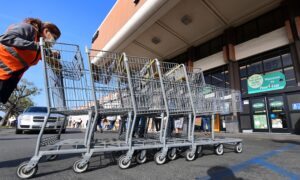 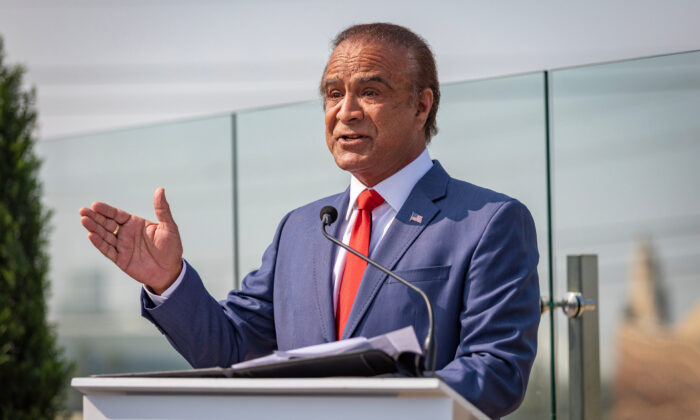 In this file photo, Anaheim Mayor Harry Sidhu discusses the need to reopen Orange County theme parks after they were closed due to the pandemic in Anaheim, Calif., on Sept. 16, 2020. (John Fredricks/The Epoch Times)
Southern California

Fiscal problems have been particularly unkind to the City of Kindness, as Anaheim, California, residents call their home city. According to a new report by California Auditor Elaine M. Howle, Anaheim was added to the “high” (worst) category for overall risk of financial distress in the state.

Just 12 of the 423 cities scored by Howle were ranked as high in the report. Anaheim was one of five additions to that category, the others being Lompoc, Modesto, Montebello, and Torrance. Those cities bucked the state’s overall fiscal improvement, despite COVID-19 problems.

“Although the state’s economic outlook is positive, 12 cities face significant fiscal challenges when we consider other factors like pension obligations,” Howle wrote.

Those problems existed before COVID-19 hit.

Specifically for Anaheim, the problems include:

General fund reserves that are so low that residents “may experience reductions in key services the city provides, such as fire, police, road maintenance, and parks.”

General fund revenues “have decreased, on average, by 1 percent over the past few years. This may constrain the city’s ability to respond to economic changes and pay rising costs of services.”

Anaheim’s pension obligations are its largest problem. Its projected annual payments to the California Public Employees Retirement System “in fiscal year 2027–28 are significant compared to its current total government revenues.”

Other post-employment benefits funding—known as OPEB—largely includes retiree health and dental funding. In Anaheim, it’s funded at only 37 percent of costs. Funding should be at 80 percent or higher.

Howle’s conclusion: Anaheim “is at risk of financial hardship and must immediately evaluate and respond to its weak financial position to prevent the reduction of city services.”

COVID-19 hit Anaheim hard in 2020, due to Disneyland being shut down. But according to a separate calculation by the auditor, Anaheim received adequate stimulus funds from the federal American Rescue Plan Act of 2021 to cover COVID-19 revenue losses. Only 18 Golden State cities didn’t receive enough stimulus funds to recover pandemic losses, the only one in Orange County being Laguna Beach.

“Anaheim has been near the bottom of California cities for a long time,” former state Sen. John Moorlach told The Epoch Times. During his six years in office, he was the only CPA in the Legislature. “They’ve been overly reliant on Disneyland. They’re a classic full-service city.”

That means all of their services, such as park maintenance, fire, and police, are provided by city employees. Newer cities, such as those in South Orange County, commonly contract out services to the county, or even private companies, reducing costs and long-term obligations.

So what can the city of Anaheim do to improve its financial standing?

“A short-term fix for any city is renegotiating OPEB,” Moorlach said. “That would help a balance sheet quickly.”

Moorlach negotiated just such a deal in 2006 with the Orange County Public Employees Association. At the time, he was the county treasurer-tax collector and had just been elected to become a supervisor, but had yet to take that new office. Retiree medical liabilities of $1.4 billion were cut by a third. A challenge was rejected in 2012 in federal court.

Anaheim long has been near the bottom of Moorlach’s own ranking of Orange County cities. He uses the unrestricted net position on the city’s Comprehensive Annual Financial Reports as a measure, believed to be the most accurate. His June ranking pegged Anaheim in 32nd place of Orange County’s 34 cities for the fiscal year ending June 30, 2020. Its per capita unrestricted net deficit was $1,761.

Put another way, a family of four in Anaheim owes $7,044 for those unfunded liabilities.

The auditor’s website also provides Excel spreadsheets for 423 California cities for the past four fiscal years.

One data point for Anaheim for fiscal 2019–20 jumps out from the data—accrued pension liabilities: $28.7 billion.