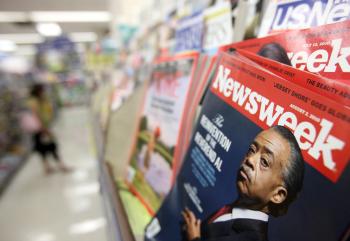 The August 2 issue of Newsweek magazine is shown on a newsstand on August 2, 2010 in Chicago, Illinois. (John Gress/Getty Images)
Business & Economy

Reid Schram
View profile
Follow
biggersmaller
Print
The 77-year-old Newsweek publication has been bought by Millionaire philanthropist Sidney Harman from the Washington Post Company on Tuesday, Newsweek said in a statement this week.

“In seeking a buyer for Newsweek we wanted someone who feels as strongly as we do about the importance of quality journalism. We found that person in Sidney Harman,” said Donald E. Graham, chairman and chief executive officer of The Washington Post Company.

The deal is rumored to not include very much actual cash changing hands, but will be centered around Harman assuming responsibility for tens of millions of dollars in financial obligations.

Newsweek's head editor, Jon Meacham, announced that he will not be staying with Newsweek after the deal is completed.

However, the CEO and much of the staff will remain employed, according to Newsweek's website.

Harman, 91, a man who made his millions in the audio industry, also holds a Ph.D and has served as both president or a member of numerous educational and governmental organizations.

He is currently a member of The Council on Foreign Relations and a well known and respected philanthropist.